Home > News > Thunderbirds are No! 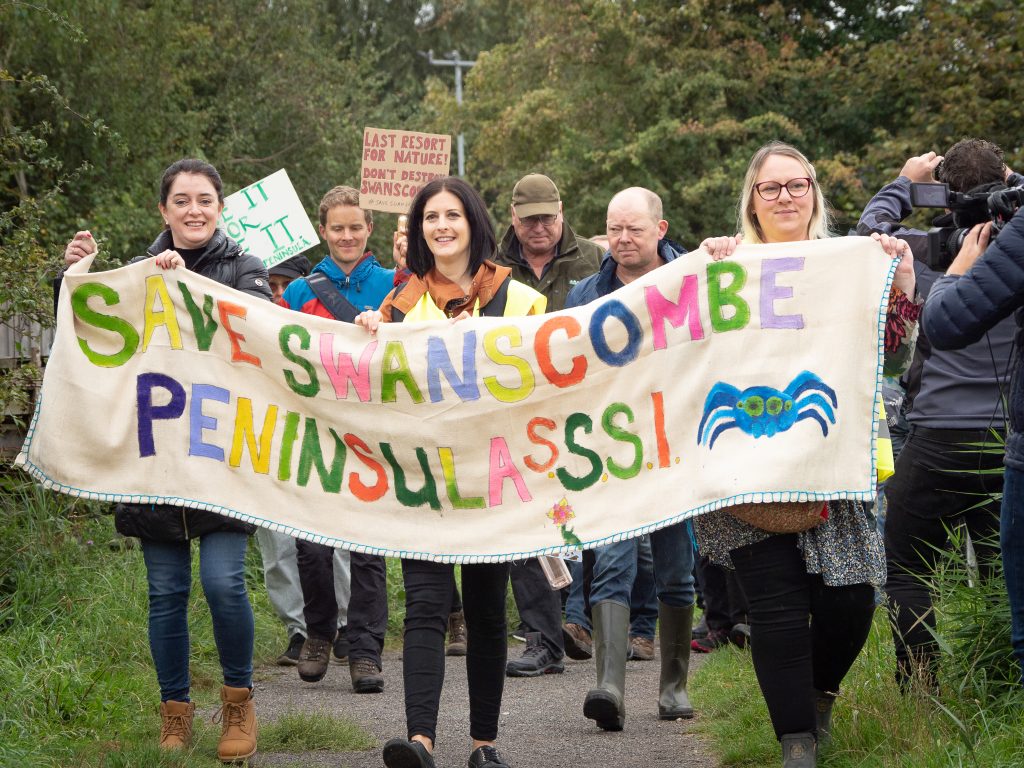 A coalition of charities has welcomed the decision by BBC Studios and ITV Studios to withdraw their support for a proposed theme park in North Kent that would have a devastating impact on a nationally important wildlife site. It is now calling on Paramount Entertainment to similarly publicly sever ties with the developers.

The Swanscombe Peninsula, which sits on the bank of the River Thames, is under threat from the proposed London Resort theme park that would see over 100 ha of habitat concreted over. Until recently, both BBC Studios and ITV Studios intended to pursue commercial relationships with the London Resort theme park that would see rides and experiences built on their brands. However, following a letter signed by 12 national and local groups, both have revealed that they no longer have agreements with the London Resort, and ITV Studios has committed to ceasing all future involvement with the controversial development.

Matt Shardlow, Chief Executive of Buglife, says, “We welcome ITV Studios’ full recognition of the environmental harm this misplaced theme park would cause and its commitment to have no future involvement.  It’s great that BBC Studios has also withdrawn from the scheme, although a long-term commitment to never become involved would fit better with the BBC Studios’ image and environmental sustainability claims.  We are disappointed that Paramount has not responded to British wildlife charities’ request to reconsider their involvement but hope it will do so and will join ITV Studios and BBC Studios in halting their support for destroying endangered species.  The theme of this wildlife oasis is nature and it must remain so.”

The Swanscombe Peninsula is incredibly rich in wildlife, home to some of the UK’s most threatened species of plants and animals. Over 2,000 species of insects and other invertebrates have been recorded here, including the Critically Endangered Distinguished jumping spider. It is also the richest site in the South East for breeding birds, living side-by-side with Otters, Water voles and rare plants such as the Man orchid. This is thanks to this special site’s remarkable mosaic of grasslands, coastal habitats, scrub and intricate wetlands, much of which is brownfield habitat that has been reclaimed by nature. In recognition of its valuable wildlife, it was made a Site of Special Scientific Interest (SSSI) last year.

Dr Hilary Newport, CPRE Kent director, said: “This is a fragile and tranquil oasis of dark skies, open space and extraordinary natural biodiversity. It is all the more precious because of its location in one of those parts of the South East subject to the most intense development pressure. In the light of the crisis of the climate emergency and catastrophic loss of biodiversity we simply cannot risk the degradation and loss of this vitally important site.”

The BBC has an international reputation for exemplary wildlife programming, with voices such as Sir David Attenborough’s highlighting the urgent need for action to save our environment to audiences worldwide. ITV Studios has also gone to great effort to green its productions and instil an environmental culture, while on screen it has broadcast programmes such as A Planet for All of Us, featuring His Royal Highness Prince William. They have both paid attention to their own important messaging and decided to avoid involvement in the destruction of a nationally important wildlife site.

Donna Zimmer, from local campaign group Save Swanscombe Peninsula, says, “BBC Studios and ITV Studios must have been aware how this looked to their millions of viewers and we are really pleased that they have both stepped away from the London Resort-  we hope that they both now commit to doing so for good. For local communities in Swanscombe, Greenhithe and Northfleet, the Peninsula is an essential and much-loved green lung, a place for peace and calm to escape the hustle and bustle of everyday life in one of the most built-up and congested parts of the country. It is unthinkable that national broadcasters could have sought to benefit from a scheme that would deprive people of experiencing wildlife on their doorstep.”

Evan Bowen-Jones Chief Executive at Kent Wildlife Trust, says, “At a time when society is increasingly concerned about the nature and climate crises it is becoming commonplace for companies to talk about sustainability. But, paper commitments are not enough. Only action counts. So we are pleased that ITV has severed all ties with the proposed London Resort. We now want to see the BBC do the same. This flagship British institution must confirm it will never work with a project that would do so much harm to our native wildlife if it is to have any green credibility at all”.

Unfortunately, despite the Swanscombe Peninsula being notified as a SSSI in March 2021 by Natural England, the Government’s adviser for the natural environment, it remains threatened by the application to build a theme park on it. These proposals are being considered by the Planning Inspectorate as a Nationally Significant Infrastructure Project (NSIP), a process normally reserved for major roads, airports or power plants. This is  the first ‘Business or Commercial Project’ to be considered to date.