After an exciting three-year team effort between Buglife, Fife Council, schoolchildren and community groups, over 13 hectares of native wildflower-rich grassland have been created at 23 locations across Fife. These new meadows are buzzing with life!

The ambitious Fife’s Buzzing project was funded by Heritage Lottery Fund and Fife Environment Trust to enhance parks and greenspaces across the Kingdom for both wildlife and people to use and enjoy. The UK has lost over 97% of species-rich grassland since the 1940s, with dramatic declines in associated wildlife including native bees, butterflies, hoverflies and beetles. Projects like Fife’s Buzzing help create habitat for pollinating insects and other wildlife. The flowers and wildlife in turn add a welcome splash of colour and interest to public spaces.

Over the course of the Fife’s Buzzing project, over 4,000 people were engaged at meadow creation days, bug hunts and other events. Pupils from 27 schools and volunteers from 10 different community groups have been vital in helping with this project and have enjoyed creating and enhancing habitat for wildlife in their local area.

The project was made possible by enthusiastic and committed landowners and managers, including Woodland Trust Scotland, Fife Golf Trust, Commscope, St Andrews Botanic Gardens and Fife Council. The extensive planting and meadow creation would not have been possible without the significant contribution of Community Payback by Offenders Scheme and Fife Council’s parks department.

Suzanne Burgess, Buglife Scotland Manager said: “People of all ages from across Fife have helped enhance their area for wildlife and learn about the importance of native wildflower and grassland meadows for wildlife, especially our pollinators that are currently under enormous pressure.”

Fife is the most heavily cultivated region in Scotland, and therefore relies on pollination for the production of food. Annual monitoring showed that the meadows had an almost instant benefit to pollinators. Baseline surveys of amenity grassland in 2014 found a total of a mere 8 invertebrate species. At the newly created meadows in 2015, 101 species were recorded including 56 types of pollinator. In 2016, this increased to an impressive 122 species, of which there were 65 types of pollinating insect. Other wildlife was spotted too, including frogs, swallows and kestrels hunting over the grassland. Even a tree bumblebee – a relatively new species to Fife – was spotted at Ravenscraig Park meadow this summer.

Johanna Willi, Fife Council Biodiversity Co-ordinator said: “There are so many benefits to improving the quality of our urban greenspaces. Rich spaces improve people’s health and well-being, create habitat for wildlife, and can even help filter pollution and alleviate flooding. So projects like Fife’s Buzzing can bring so much to a community. What’s more, there were lots of fun and educational opportunities for people to become actively involved. It’s been a brilliant project all round”.

Fife’s Buzzing meadows can be enjoyed at Aberdour Silver Sands, Ravenscraig Park in Kirkcaldy, Riverside Park and Formonthills in Glenrothes, Tayport Common in Tayport, Leuchatsbeath in Cowdenbeath, Bankie Park in Anstruther, and many more locations. 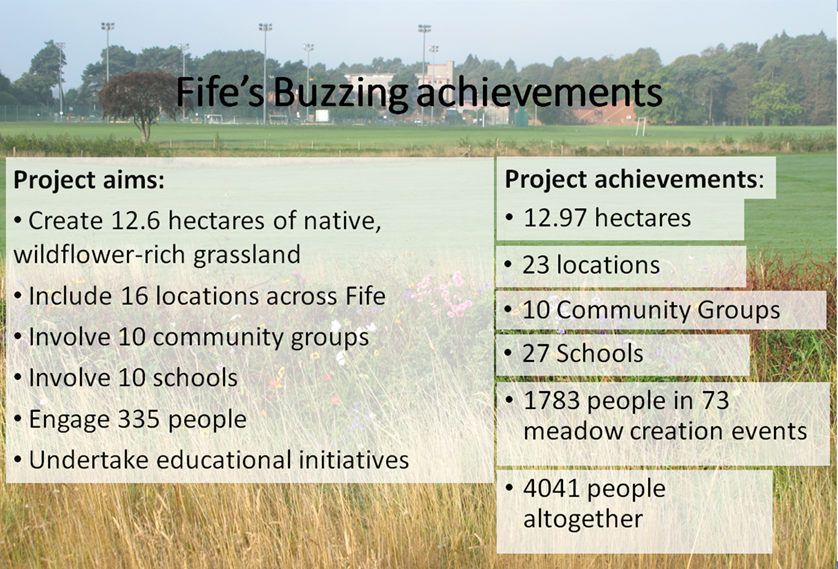