As EU countries are poised to vote on a proposal to introduce tougher restrictions on bee-harming insecticides a new analysis shows fears that the existing ban would result in a huge loss of crops and a massive increase in insecticide use in the UK have not been realised.

Having committed to support the tougher ban the  UK is now able to argue that banning neonicotinoids can be cost-effective as well as environmentally wise.

Four years ago this month the European Commission restricted use of three highly bee-toxic neonicotinoid insecticides in the spring and on flowering crops.

2013 and 2014 was wild with speculation from the NFU, the Government Chief Scientist and other commentators that the partial ban might cause 10%, 20% or even 70% loss of the oilseed rape crop and a switch back to using greater quantities of older insecticides that could cause harm to bees.

Recently released FERA national statistics for 2016 show that on average insecticide spray use on oilseed rape increased by 6% per year in the decade before the ban and by 7% per year after the ban. The weight of insecticide sprayed actually went down between 2014 and 2016, probably due to efforts to reduce pesticide dose rates.

The really good news for bees is that there has been a 30% reduction in spring insecticide sprays on oilseed rape.  This is the time of year when bees are most active and at risk in oilseed rape.

And the great news for everyone is that average crop yields are higher after the ban, with oilseed rape in the UK yielding on average 3.6 tonnes per hectare in the three years since the ban, compared to 3.4 in the five years prior to the ban (2009-13). As a result in 2017 the UK produced 2.2 million tonnes of oilseed rape, more than in 2013, but on an area of land 20% smaller.  Indeed affected crop yields across the EU have done well with spring oilseed rape up 5.1%, winter oilseed rape up 0.7% and maize up 5.7%.

In Finland this year scientists concluded that crop yields were suppressed by neonicotinoid associated pollinator declines, so the improved UK and EU yields could have been the result of improved pollination and possibly more insect predators in the crop.

Flea-beetles have caused some problems for farmers and a survey undertaken in Eastern England in 2015 showed significantly more farmers were spraying insecticides on oilseed rape and the average number of sprays had gone from 1 to 3 (Kathage et al 2017).  However, flea beetle numbers in Eastern England were increasing before the ban and this is likely to be linked to developing genetic resistance to pyrethroid sprays, rather than the ban.  Resistance to pyrethroid sprays is a symptom of over-reliance on insecticides, a problem which needs to be addressed by supporting alternative farming methods and breaking the link between the agrochemical industry and farmer advice.

The European Commission is proposing an extension of the ban to all outdoor crops, this will be discussed on 12-13th December and Member States may be asked to vote.  The UK, Ireland and France have recently indicated that they support a tougher ban but other Member States have not made their positions known.

The proposal is a response to a scientific opinion from the European Food Safety Authority in November 2016 that neonicotinoid seed treatments on non-flowering crops also pose a high risk to bees, due to toxic dust and the pollution of wildflowers.

80 European NGOs in the “Save The Bees Coalition” are asking EU decision-makers to completely ban outdoor neonicotinoid seed treatments without further delay.

The NGOs also want Member States to urgently approve the 2013 EFSA Bee Guidance Document that would help to ensure that bee harming pesticides are not approved in the future.  The UK has yet to indicate support for the new assessment process.

“Efforts to make our countryside safer for bees and wild pollinators have successfully reduced the chemical hazards they face and we are producing more food as well.  The quicker we can remove neonicotinoid seed treatments entirely the better it will be for life on earth.”  Matt Shardlow, CEO, Buglife.

“It’s good news that farmers are able to produce good yields without bee harming pesticides. The UK Government is right to back a more comprehensive ban on neonicotinoids, – a move which now needs to be supported in the forthcoming EU vote. Governments can then focus on helping farmers to keep protecting their crops and our essential pollinators”. Sandra Bell, nature campaigner at Friends of the Earth.

“Honey bees forage over a wide range of plants and flowers even when oilseed rape is flowering, including potted plants that may have been treated with neonicotinoids, and we should do all we can to ensure that they do not come into contact with these long lasting pesticides, so we support the extension of the ban to all crops and pot plants.” Martin Smith, British Beekeepers Association (BBKA) Director of Communications. 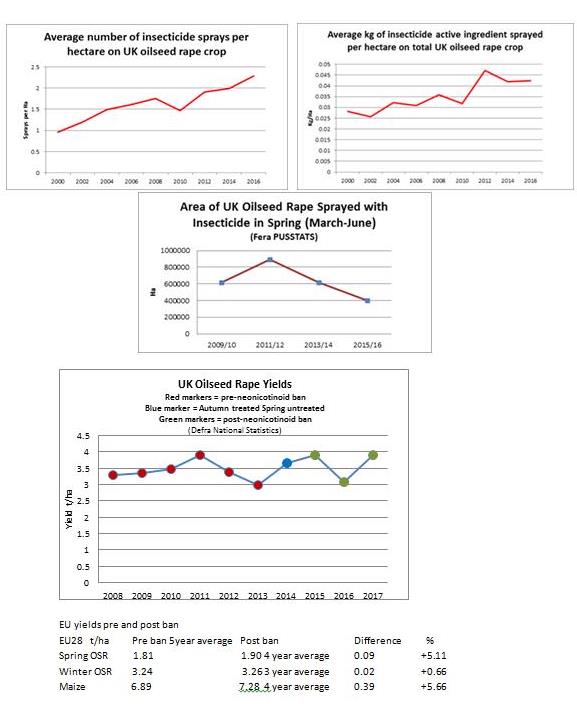 Matt Ridley claims that 50% of crop has been lost to flea beetles in Hampshire and increased pyrethroid spray use.

Kathage et al 2017 The impact of restrictions on neonicotinoid and fipronil insecticides on pest management in maize, oilseed rape and sunflower in eight European Union regions

GWCT and Natural England report into Neonicotinoid Use finds that farmers who use neonicotinoid seed treatments are more likely to spray an insecticide in spring.