Home > News > “Splatometers” at the ready for Bugs Matter this Summer! 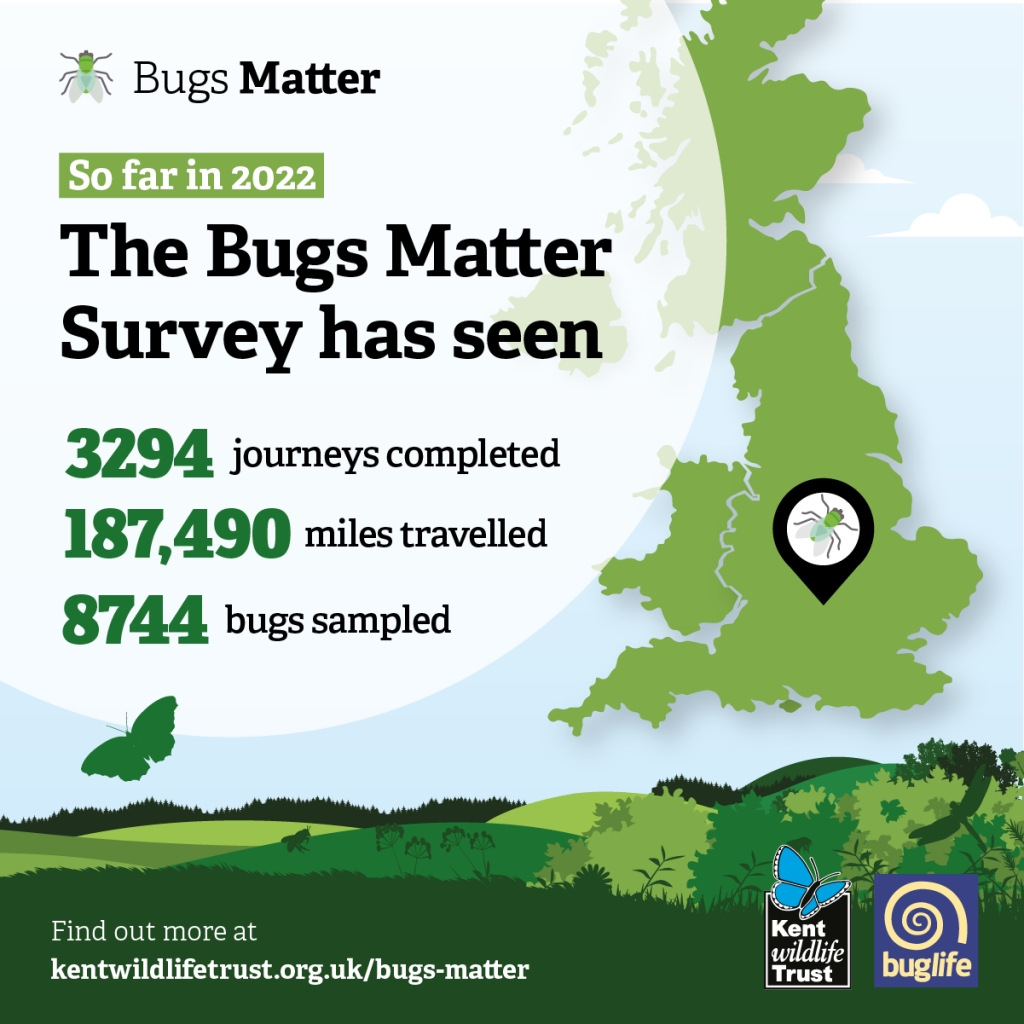 June 1 saw the much-anticipated launch of Bugs Matter 2022, the annual national insect survey led by Kent Wildlife Trust and Buglife.  So far in 2022, citizen scientists have recorded over 3000 journeys across the UK!  The data collected provides vital information on the health of our insect populations, and our environment as a whole. The survey continues until the end of August – so there is still time to download the Bugs Matter app and get involved.

Participation across the four countries of the UK in this vital citizen science project varies greatly.  So far, 2627 journeys have been recorded across England, 400 across Wales, 220 across Scotland and 47 across Northern Ireland.  With the Bugs Matter 2022 survey period running until 31 August, fresh calls are being made to those making car journeys around the UK to become citizen-scientists and put their “splatometers” in action.

Andrew Whitehouse from Buglife said: “We are really pleased that so many people have signed-up for the Bugs Matter survey this year, helping us to measure the health of insect populations across the UK. The response so far has been fantastic.  There are locations where we are keen to see more journeys recorded; in particular the north of Scotland, central Wales and across Northern Ireland but there’s still plenty of time to get involved.  Let’s make every journey count this summer!”

Dr Lawrence Ball from Kent Wildlife Trust said: “It’s great to see so many citizen scientists getting involved in the survey in its second year. We’ve just overtaken the number of journeys we recorded at this time last year, which is brilliant because a larger dataset means we can get a clearer picture of how insect numbers are changing over time. The data we’re collecting is so important, so keep going everyone!”

The fast approaching school summer holidays offer the ideal opportunity to take part in Bugs Matter, with increased travel for short breaks or visits to family.  All journeys provide useful data –  long or short, day or night, and no bug splats is just as important as many bug splats!

Smartphone users can take part by downloading the free Bugs Matter app from their app stores.  The concept is simple; before making a journey in a vehicle, clean the number plate, and tap “Begin Journey” in the app..  On reaching the destination count the bugs squashed on a section of the number plate by holding the “splatometer” grid against the number plate.  Take a photo and submit the information via the app.

Heather Knapp from Evolve Counselling, who is taking part in Bugs Matter shared:  “I’m encouraging everyone who drives to join in.  All you have to do is clean your number plate before a journey, take a picture of it after your journey (using a template), count the bugs and upload the information to the app.  What a worthwhile thing to do – very little effort for the benefit of knowing you’re helping to monitor how insects are being affected by our modern way of living.  Hopefully we’ll all be incentivised to make a few changes and promote a more hospitable environment for our creepy crawly friends!”

Download the Bugs Matter app to take part in this year’s survey, up until 31 August 2022. Taking part is quick and easy.

Participants will receive a “splatometer” through the post but if they want to get started straight away they can download a print-at-home version from Bugs Matter – Buglife.  The data collected from these ongoing surveys inform a growing requirement for conservation research, policy and practice targeted at insects in the UK.