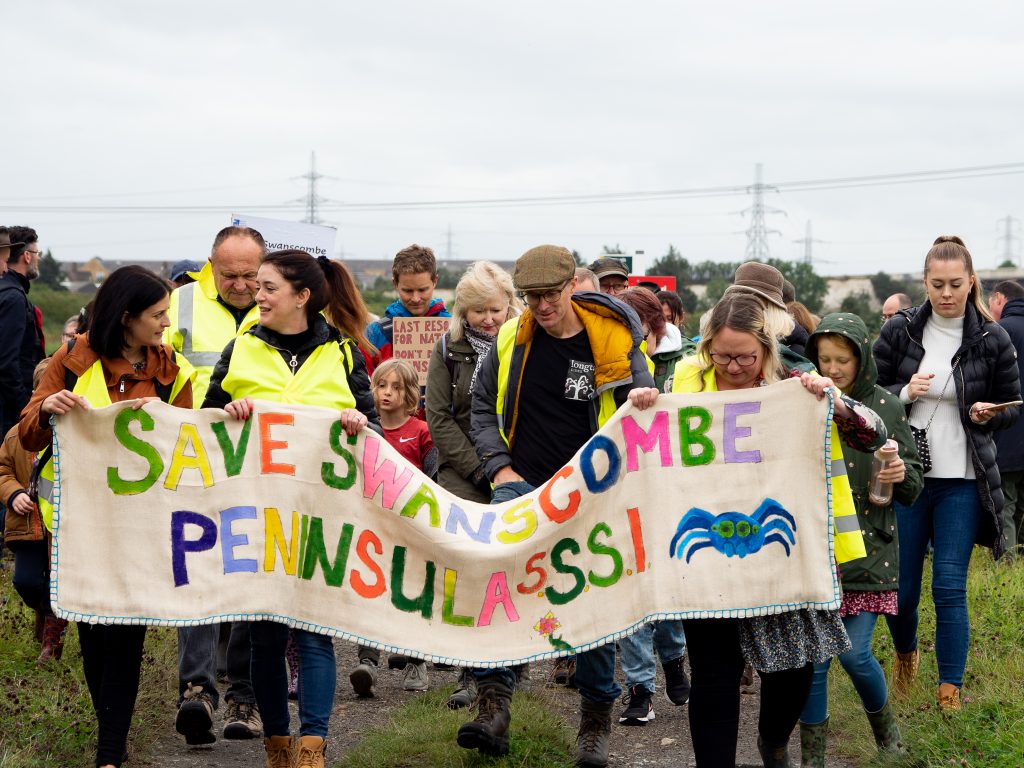 Campaigners against a proposal to build a theme park on a nationally important wildlife haven at Swanscombe Marshes in Kent, voted with their feet at the weekend by rallying to make their objections heard.

Local people and representatives from Save Swanscombe Peninsula, Buglife, RSPB, Kent Wildlife Trust and CPRE Kent turned out in force to rally at the site, listening to powerful speeches against the theme park development from local Councillor Laura Edie and Buglife’s Chief Executive, Matt Shardlow. A guided walking tour to quietly experience the tranquil beauty and wildlife of Swanscombe Marshes, also took place.

Swanscombe Marshes was notified as a Site of Special Scientific Interest (SSSI) following a campaign by the wildlife charities, which recognises its national importance for breeding birds, threatened invertebrates, plants and geological features. It consists of a vast array of precious habitats including grassland, coastal habitat, scrub and wetlands, with former industrial land that has been reclaimed by nature. Swanscombe is also a much-loved local greenspace on the Thames, used by local people for decades to enjoy nature, walk their dogs or just to experience the tranquillity that it offers.

If the planned London Resort theme park goes ahead on Swanscombe Marshes, it would be catastrophic for wildlife and represent one of the largest ever losses of nationally important habitat in England. In the midst of a biodiversity and climate crisis, and to meet the government’s commitments to protect 30% of the UK for wildlife by 2030, we cannot afford to lose over 100 hectares of a SSSI.

Buglife, RSPB, Kent Wildlife Trust, CPRE Kent and Save Swanscombe Peninsula have all joined forces to challenge the theme park development. A petition launched by Buglife to oppose the theme park has already received over 25,000 signatures.

The wildlife charities say the site is home to a staggering amount of wildlife. This includes over 2,000 species of invertebrate- including the critically endangered distinguished jumping spider, found at only one other site in the UK, the sea aster mining bee, brown-banded carder bee and saltmarsh shortspur beetle.

Swanscombe supports outstanding breeding bird populations comparable with the best sites in England- including the elusive grasshopper warbler, nightingale, cuckoo, marsh harrier and black redstart. It is also home to rare plants such as the endangered Man orchid, as well as bats, reptiles and water voles.

Jamie Robins, Projects Manager at Buglife said, “Swanscombe Marshes is one of the best wildlife sites in the country, home to an extraordinary array of wildlife. Today’s rally shows that people value nature more than a theme park, and that local communities are willing to stand up and make their voices heard. During a biodiversity crisis, we simply cannot sit back and allow special sites such as Swanscombe Marshes to be destroyed. We hope that today is the first of many gatherings here celebrating the site long into the future.”

Nick Bruce-White, Operations Director at the RSPB said, “It is shocking that the London Resort proposal to build on Swanscombe Marshes has got so far down the road in the planning process. We cannot stress enough how important this site is for wildlife, and for people to visit and connect with nature. The turnout at the rally proves that local people passionately care for the marshes and wildlife that lives there, and do not want to see it wiped out forever for the sake of a few fairground rides. We urge people, both near and far to get involved in the Save Swanscombe Marshes campaign with us and our partners, sign the petition, and unite in the fight against this totally unnecessary theme park.”

Julia Hunt, Head of Advocacy at Kent Wildlife Trust said, “Nature is not just a nice-to-have: every one of us relies on it to provide the air we breathe, the food we eat and the resources that prop up our entire economy.  And every one of us has the power to make our voices heard.

“The local support for the Save Swanscombe campaign has been brilliant – from signing the petition, to joining this rally – a local farm has even produced a new cider to raise funds for the campaign. But the loss of this site wouldn’t just impact local people; it would have permanent and devastating ramifications on a national scale.  We call on the Government to stand up for wildlife, honour its commitment to protect 30% of land and sea by 2030, and save this site from destruction.”

David Mairs, Campaigns Manager of CPRE Kent, the countryside charity, said, “Nature cannot continue to be squeezed out. We are in the worst biodiversity decline yet, with the UK the most biodiversity-deprived country in Europe and across the western world. If we continue to destroy areas such as Swanscombe Marshes, we will reach a tipping point of no return. There is nothing green about the London Resort proposal, it is simply profit coming before nature.”

Donna Zimmer representative of Save Swanscombe Peninsula said, “During the current climate & wildlife crisis, a protected site like Swanscombe Peninsula should be celebrated for its unique habitats and rare wildlife species. It is madness that we are now having to fight to save this irreplaceable natural asset from a huge theme park that will also displace thousands of existing jobs and create yet more traffic chaos and air pollution in Kent and Essex.”