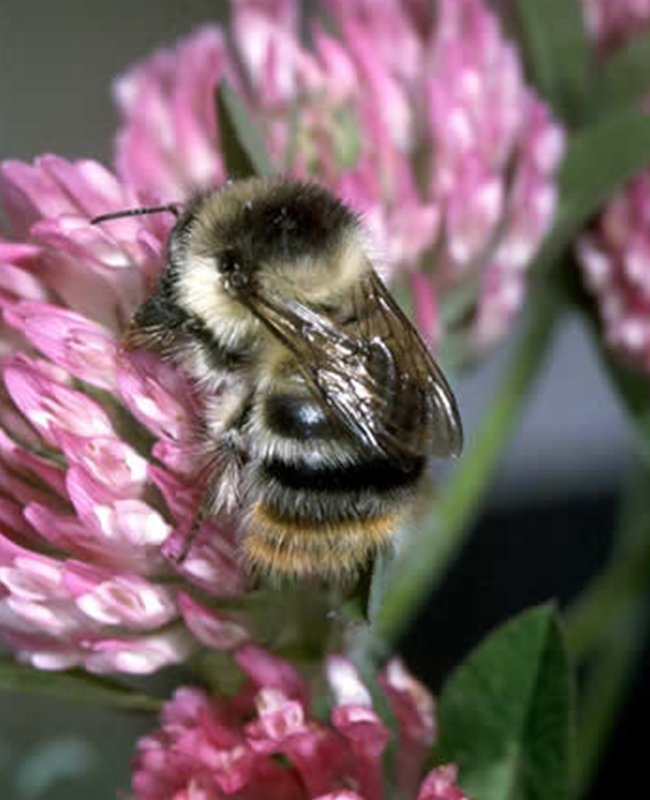 A group of leading conservationists have committed to work together to save the rarest bumblebee in England and Wales, the Shrill carder bee.

From today (14 July 2020) more than 30 organisations and dozens of individuals, including conservation charities, government bodies, volunteers, farmers, and businesses, will collaborate on a multi year vision to create a landscape where Shrill carder bee populations can survive and thrive.

The group will be guided by the newly published Shrill carder bee conservation strategy. The strategy was developed through a collaborative process led by the Bumblebee Conservation Trust, working with Buglife.

The Shrill carder bee (Bombus sylvarum) is a distinctive bumblebee which can be identified by its pale grey-yellow colouring, black band of hair between the wings and reddish-orange tail, and a noticeably high pitched buzz.

Loss and fragmentation of habitat is a key threat isolating Shrill carder bee populations in England and Wales. It now only exists in five isolated population areas: the Thames Estuary, Somerset, the Gwent Levels, Kenfig–Port Talbot, and south Pembrokeshire. A sixth population, located on Salisbury Plain, is thought to have been lost in the last ten years.

The small number of surviving populations makes the Shrill carder bee vulnerable to inbreeding and loss of genetic diversity, further increasing the risk of local extinctions.

The new coalition will collect scientific evidence on current Shrill carder bee populations, work with landowners to create a network of flower-rich landscapes to support the Shrill carder’s recovery, and raise awareness amongst the wider public of the importance of this beautiful but threatened bumblebee.

Sinead Lynch, Conservation Manager at the Bumblebee Conservation Trust said, “I’m delighted that a wide range of organisations and stakeholders from across England and Wales have come together to create a vision for how we can not only halt the decline of this flagship bumblebee species but also see it thrive once more. Once widespread in England and Wales the Shrill carder bee has suffered acutely from the widespread loss of lowland flower-rich habitats, particularly grassland habitats, with major declines in the second half of the 20th century.”

Jamie Robins from Buglife said, “This is a hugely important step to help reverse the fortunes for one of our rarest bumblebees. The new conservation strategy has brought together experts and partners from across England and Wales, and we’re hopeful that together we can work together to bring back the wildflower-rich landscape that the species needs to thrive.”

Jon Curson from Natural England said, “This is a fantastic achievement by the Bumblebee Conservation Trust and all the partners. Natural England welcomes this strategy and is proud to have played a part in its development. The Shrill carder bee is one of our rarest bumblebees and is under threat from a variety of causes including habitat loss and sea level rise. We hope that this strategy will raise the profile of this enigmatic bumblebee and help in its conservation so that future generations can enjoy seeing it, and all the other wildlife that shares its habitat.”

Gill Perkins, CEO, Bumblebee Conservation Trust, said, “By 2050 we want the Shrill carder bee to be thriving, with sustainable populations that are spreading and connecting across a network of flower-rich landscapes. The Shrill carder bee, and its high pitched buzz, is an important part of our natural heritage. By working together we take practical action to guarantee a successful future for this iconic and beautiful bumblebee.”

In addition to the Bumblebee Conservation Trust and Buglife other key members of the projects steering group are the Bees, Wasps & Ants Recording Society, Cyfoeth Naturiol Cymru/Natural Resources Wales, the RSPB, and Natural England.

The strategy is also endorsed by 25 other organisations, each of which will play an important role in reversing the extinction threat to the Shrill carder bee. It was developed with help from the IUCN’s Species Survival Commission Conservation Planning Specialist Group.

The full report “A Conservation Strategy for the Shrill carder bee, Bombus sylvarum in England and Wales 2020-2030“ . The strategy was developed within the ‘Back from the Brink’ Shrill carder bee project.