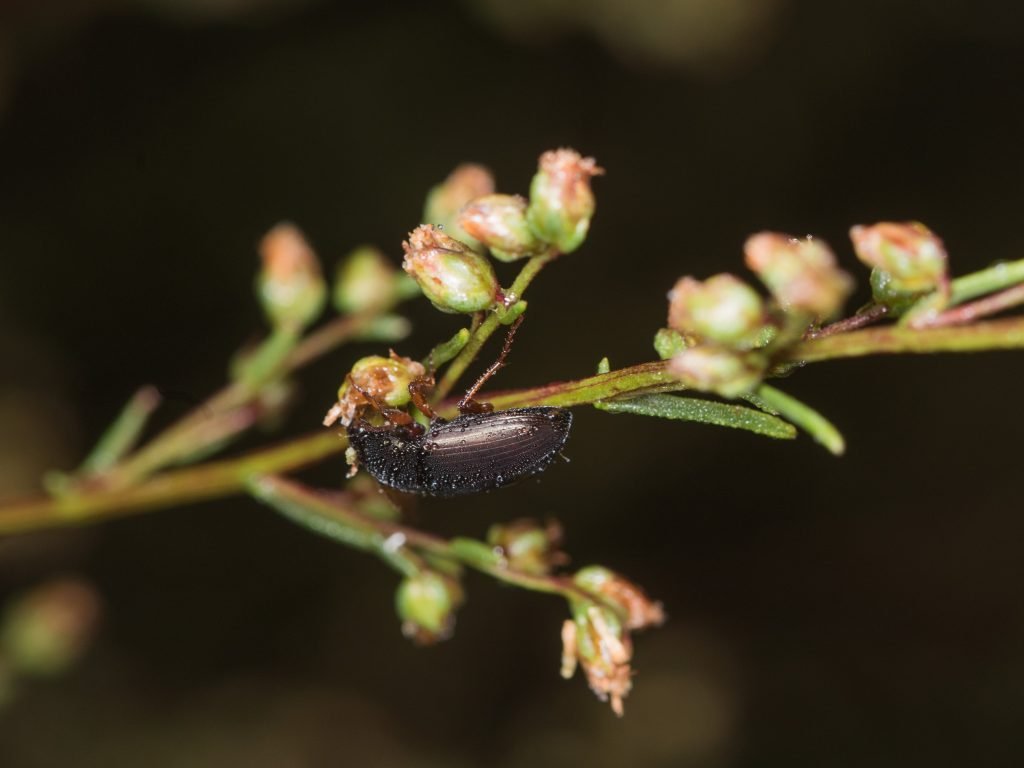 2019 proved to be a fantastic year for one of the UK’s rarest beetles, the elusive Wormwood moonshiner (Amara fusca). The beetle was found at two new sites with dedicated volunteers taking part in the Back from the Brink Shifting Sands project, which sees nature conservation partners working together to safeguard the future of rare Breckland wildlife.

The Moonshiner is named for its habit of emerging at night to feast on the ripening seed heads of Field wormwood (Artemisia campestris), a fellow rare speciality of the Brecks. The beetle hadn’t been seen in the UK since 2011, until a new population was discovered in 2018 on green space within a Mildenhall housing estate. It was recorded at three Breckland sites in 2019. Volunteers returned to College Heath Road in Mildenhall this autumn and found an incredible 72 beetles, the second highest count for the species on record.

Volunteers were even more excited to find two new sites for the Wormwood moonshiner in the following weeks, with a single beetle found at Forestry England’s Mildenhall Warren, on a large mature Field wormwood plant. A month later, two beetles were found on Brandon’s London Road Industrial Estate, on Field wormwood plants which had made their home in the car park of an industrial unit. This followed the designation of the industrial estate as a County Wildlife Site & Roadside Nature Reserve, thanks to the collaboration of Shifting Sands partners.

“It’s really exciting to find new sites for such a rare beetle, particularly after a number of years with no sightings and its disappearance from previous strongholds. This goes to show what Back from the Brink can deliver – volunteers armed with just torches, warm clothes and a bit of knowledge have made a really valuable contribution to conservation.”

”The discovery of new Wormwood moonshiner sites is fantastic news for Breckland wildlife. The beetle is one of our Brecks specialists, and one of many endangered plants and animals that are only found here. It’s a really special place, reflected by the passionate volunteers that are working to protect it.”

The Wormwood moonshiner has been lost from large areas of the Brecks as traditional land management practices have changed, leading to the disappearance of its Field wormwood foodplant. Until drastic management intervention in 2018, wormwood had also been nearly entirely lost from the modern stronghold for both species- a postage stamp sized Site of Special Scientific Interest (SSSI) on the London Road Industrial Estate in Brandon, prompting concerns for its long-term future as a UK species.

The Back from the Brink project, made possible thanks to The National Lottery Heritage Fund and People’s Postcode Lottery, aims to save 20 species from extinction and benefit over 200 more through 19 projects that span England.