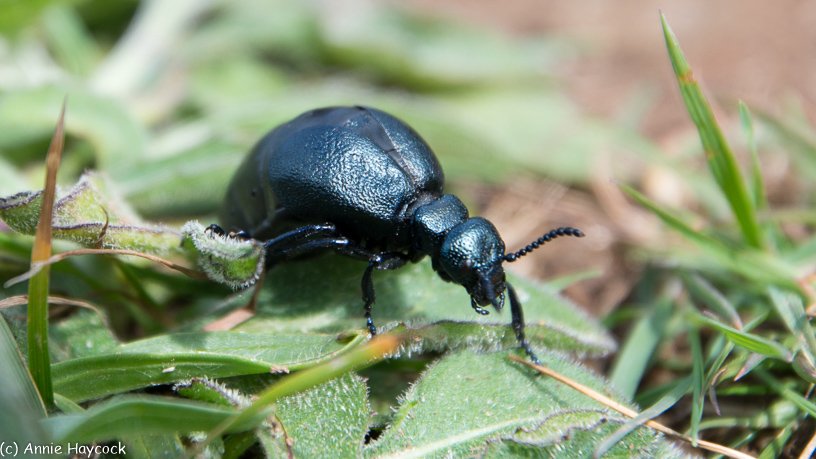 The Short-necked oil beetle (Meloe brevicollis), one of the UK’s rarest oil beetle species, has been rediscovered in Wales. This very rare species was previously believed to be extinct in Wales, having not been seen since 1944, until its rediscovery in Pembrokeshire by Annie Haycock. Pembrokeshire now supports the only known modern record of this species in Wales. Outside of Wales, the Short-necked oil beetle is currently known only from the island of Coll in the Inner Hebrides, and single locations on the Salisbury Plain and in south Devon. An unconfirmed record from Dorset also exists.

Formerly more widespread, the Short-necked oil beetle experienced a severe decline during the twentieth century and went completely unrecorded in the UK from 1948 until its rediscovery in south Devon in April 2006. Like other oil beetle species, it is dependent upon solitary bees to complete its life-cycle.

Oil beetles are nest parasites of solitary bees and have extraordinary life-cycles. Oil beetles dig burrows in the ground, in to which they lay hundreds of eggs. Once hatched, the active, louse-like larvae, known as triungulins, climb up onto flowers and lie in wait for a suitable host bee. When a bee visits the flower to collect pollen or nectar, the triungulins attach themselves to hairs on the bee’s back using hooks on their feet. Once in a suitable bee’s nest, the beetle larva disembarks. The beetle larva then feeds on the bee’s store of pollen and nectar and develops in the burrow until it is ready to emerge as an adult oil beetle. Such highly specialised life-cycles make oil beetles particularly vulnerable to environmental change.

The Short-necked oil beetle is found in wildflower-rich cliff-top grasslands, heathlands and machair dunes, with adults active in the spring from late March to June and the triungulins active in June and July. It is known to use the Hairy-saddled colletes bee (Colletes fodiens) as its host on Coll and at its single Irish site, however its host bee species remain unknown elsewhere.

Due to its small size, measuring up to 24mm in length, Short-necked oil beetle may have been overlooked in some areas so please remain vigilant. They are identified by their rectangular-shaped thorax (which is wider than it is long), its short and straight antennae which are slightly thickened at the tips, and its shiny, blue-black colour. Confusion with the more common and widespread Black oil beetle (Meloe proscarabeus) and Violet oil beetle (Meloe violaceus) is possible but these species have a roughly square-shaped thorax. Our Oil beetle Identification guide will help you identify your beetles.

If you think you have found a Short-necked oil beetle, please send details of your sightings, along with a photograph(s), to [email protected].