The MSP is the Scottish Parliament’s Species Champion for the Bog sun-jumper spider (Heliophanus dampfi), which is only found on a few lowland raised bogs around Stirling and a single bog in Wales. The spider has evolved to thrive in the wet, acidic conditions found in peat bogs and can’t survive anywhere else. The most effective way to find the tiny (3-5 mm long) spider is by using a modified leaf-blower to ‘hoover’ the bog!

In the last 200 years over 80% of lowland raised bogs in Scotland have been damaged or destroyed by drainage for peat extraction, agriculture or forestry. This has lead to the loss of habitat for many bog-specialist species such as insectivorous sundews, sphagnum mosses, and invertebrates such as the Bog sun-jumper spider and Large heath butterfly. Bogs aren’t just important for wildlife though, as damaged bogs produce huge amounts of green house gases as thousands of years of preserved vegetation in the peat begins to rot, contributing to global warming. Drainage also prevents bogs from soaking up rainwater after storms, which increases the risk of local flooding.

Commenting on the day Angus Macdonald said “I was delighted to take part in the survey at Wester Moss, and join the hunt for the Bog sun-jumper spider. Our efforts were not in vain, as we found 3 of the spiders while I was there, however given how few we found it highlights the challenges this little spider faces. We must do all that we can to protect their environment. Whilst good work is underway, much more needs done if we are to protect lowland raised bogs in Central Scotland, however Buglife Scotland and all their partners must be commended for the work they have undertaken to date. As Species Champion for the bog sun-jumper spider I will to continue to raise the plight of this little beauty at every opportunity.”

Buglife Scotland Conservation Officer Dr Scott Shanks said, “Many thanks to Angus for all his work in the Scottish Parliament helping to raise awareness of the importance of Scotland’s peatlands for wildlife, flood-prevention and carbon storage. We were really lucky to find 6 Bog sun-jumper spiders (all of them females) during 2 days of surveying with volunteers. Before the survey little was known about the abundance or distribution of the tiny (3-5 mm long) jumping spider at Wester Moss. The survey has highlighted how rare the species is!” 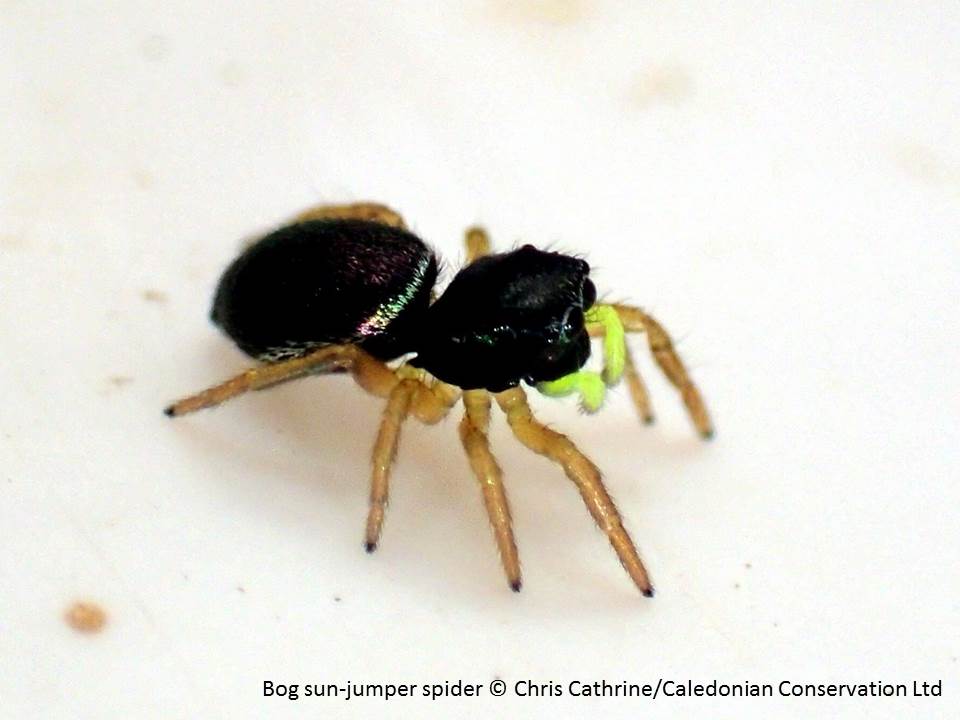 The survey was part of a series of free events within IFLI’s Forth Nature Counts project. Forth Nature Counts seeks to map the variety and abundance of plants and animals in the local area. The Inner Forth Landscape Initiative (IFLI) team, who run the project, are encouraging members of the public to log their own wildlife sightings via a bespoke form on iRecord and have organised over 80 free training workshops to equip people with enhanced identification and survey skills.