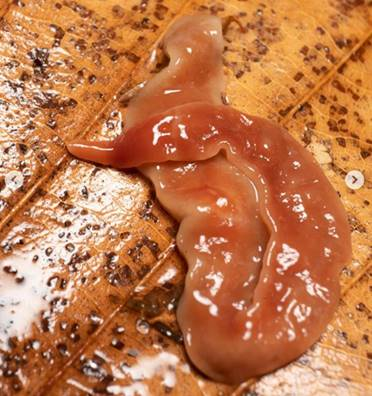 An invasive flatworm from Australia has turned up in an unusual place – under a cowpat on Dartmoor!

The Australian flatworm (Australoplana sanguinea) grows up to 8cm long, and has a flattened, shiny pinky-orange body.
This isn’t the first sighting of the Australian flatworm in the UK – it has previously been found in urban areas, and is thought to be imported into the UK in plant pots. However, this species is now appearing further afield in the countryside.

The Dartmoor worm was discovered near to Chagford by Nicky Scott, and was identified by television naturalist Nick Baker. Nick said “The worm was found under a cow pat in a field opposite my house, by my neighbours who recognised it as ‘not a regular worm’. It is interesting just guessing how it got to be where it was.”

There are at least three native species of land flatworms in the UK, but more than ten non-native species. Non-native land flatworms are introduced accidentally in imported pot plants and new species arrive in the UK every year. Once introduced they can reproduce rapidly, cannot be eradicated, and pose a risk to native invertebrates such as earthworms by feeding on them.

Andrew Whitehouse from Buglife said “Discovering the Australian flatworm on Dartmoor is a real concern as it indicates that this species is spreading into our countryside where it poses a threat to our native worms.”

“The importation of pot plants brings with it a tide of new species hidden in the soil, many of which have the potential to harm native wildlife or damage agriculture. Buglife are calling on the Government to ban imports of pot plants, and ensure that our country’s biosecurity is sufficient to protect our wildlife.”

The past few weeks have seen a number of other sightings of invasive flatworms including South American Obama nungara was found in a garden in Braintree Essex.