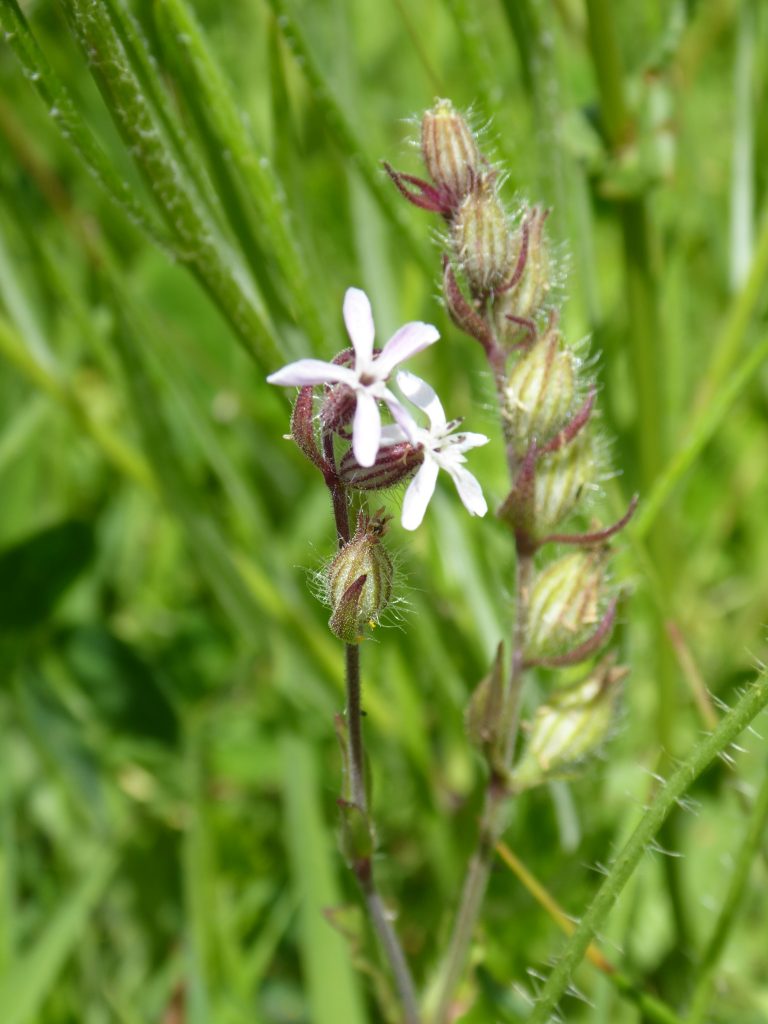 Nature conservationists are surprised and excited by the unexpected appearance of a rare plant in parks in Falmouth and St Austell.  The Small-flowered catchfly is an endangered plant in the UK, and to find it in a park is very unusual.

As part of Urban Buzz, several new wildflower meadows were created in each town, and they are just starting to flower for the first time. Upon surveying the Falmouth meadows, Buglife volunteer Charlotte Rankin and Kevin Thomas from Falmouth Nature discovered the rare and endangered plant, Small-flowered Catchfly.

Charlotte said “Discovering Small-flowered Catchfly at two Urban Buzz sites in Falmouth was greatly exciting! This arable plant is a rare sight to see both in Cornwall and nationally, so I certainly wasn’t expecting to see it in an urban setting on my doorstep. As its name suggests, it is a really small plant and easily overlooked, so it was only when I knelt down to photograph a visiting pollinator that I discovered it amongst the meadow’s annuals. When visiting the other Urban Buzz meadows in Falmouth, I kept my eyes peeled and to my delight, another was found! It’s amazing what species can be discovered when they are given a chance.

Small-flowered Catchfly is normally found in arable fields but can also be found on disturbed ground near the coast. It has disappeared from over 70% of its former range and is a Priority Species for conservation in the UK.

It is thought that by disturbing the ground to create the new Urban Buzz meadows the Small-flowered Catchfly seed has been brought to the surface, enabling it to germinate and flower after many years of being dormant in the soil.

Emma Pearce, Horticultural Scientist at the Eden Project said, “Eden Project’s National Wildflower Centre designed and supplied bespoke seed mixes for each of the Urban Buzz Cornwall sites. In total, 46 different wildflower species were used for the mixes, all of which were carefully selected to benefit pollinating insects and suit the individual sites. None of these mixes contains Small-flowered Catchfly. Eden Project is also working with Colour in the Margins, Back from the Brink project to conserve rare arable wildflowers including the Small-flowered Catchfly, and so we are delighted that Urban Buzz Cornwall’s work has helped this rare and beautiful little plant to make a comeback.”

Hannah Gibbons, Colour in the Margins Farmland Monitoring and Advisory Officer for Devon & Cornwall said “Small-flowered Catchfly has only been recorded in about 40 sites in the UK since 2000 and Devon and Cornwall provide a stronghold. To thrive this annual species requires regular disturbance, usually in the form of ploughing and is most often recorded in arable fields.  It has become very uncommon now for various reasons including the widespread use of herbicides. It is great to know of more records of this species, particularly as it is one of the ten species that the Colour in the Margins project is focusing on.  It is likely that these new sites have not been disturbed in a while, highlighting the ability of the seeds to last for long periods within the seed bank”.

Since the discovery of the plants in Falmouth, Buglife Conservation Officer, Laura Larkin, has found another plant at one of the meadows in St Austell.

Laura said “This really wasn’t something we were expecting to find in the new Urban Buzz meadows, but it just goes to show that nature really can and does respond well to more wildlife-friendly  management of public  green spaces. Making small changes to the ways we look after not just our public spaces, but also our gardens, can really do wonders for plants, pollinators and much other wildlife too. Anyone can do their bit and make a difference, and who knows what we’ll find in the future.”

Top tips to help insects in your garden