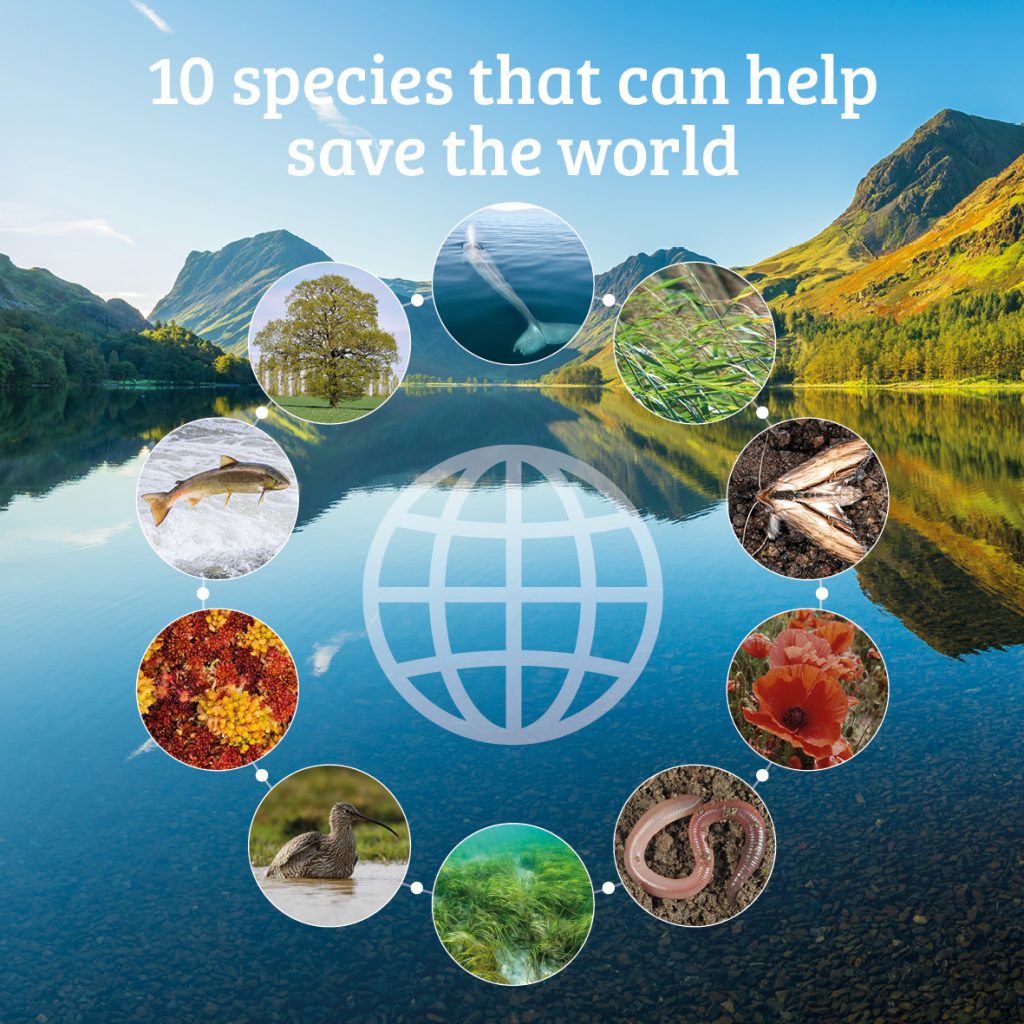 13 nature charities including the Woodland Trust. Marine Conservation Society, Buglife, and Wildfowl & Wetlands Trust  have today published a new report – 10 species that can help save the world  – on the need for urgent UK leadership in 2022 to restore nature at home and globally.[1]

The report highlights the vital but often unseen, underestimated and undervalued roles of all wildlife in protecting our climate, water, air and soils, revealing little known facts about 10 key species. The charities are calling for radical government action to protect UK species and to secure a strong global deal for nature at critical COP15 biodiversity talks. These talks are vitally important as they will set international commitments to restore nature for the next decade.

Preparatory meetings for the COP15 global nature talks are taking place from today (14 March) in Geneva, with the main talks expected to take place in Autumn this year in Kunming China. The UK, as COP26 presidents, should have a critical leadership role at the talks given the inextricable link between our nature and climate crises. England is also the only country in the world with a legal target to halt nature’s decline. Nature experts say a main goal of the talks should be to persuade other nations to commit to a target not just to halt, but to reverse the decline of nature.

Given the UK’s key role in setting the tone for the COP15 talks nature experts are asking for:

Domestic action of this kind will help demonstrate leadership, paving the way for global agreement.

Dr Richard Benwell, CEO of Wildlife and Countryside Link, said: “From earthworms improving our soils, to moths pollinating our crops, nature plays a pivotal role in protecting our climate, economy and prosperity.  These ten species give a glimpse of the benefits we would enjoy if wildlife were restored.

“The presidency of COP26 climate talks gives the Government a great opportunity to be a world leader at the equally essential COP15 nature talks. The UK is the first country in the world with a legal deadline to end the decline of wildlife. If the Government can back this up with a plan to strengthen and complete protection for wildlife sites and species in advance of the talks, the Prime Minister could be brilliantly placed to help secure a global agreement to restore nature and climate.”

Ed Fox, Director at Whale and Dolphin Conservation, said: “This important and timely report reminds us that, while we spend huge resources developing new technologies to avert climate and ecological breakdown, the natural world has already provided us with some of the greatest allies – from the largest whale to the smallest species on Earth. We just need to protect them.

“Nature’s power to tackle climate change is immense, great whales help tiny phytoplankton in the ocean to capture six times as much carbon as the Amazon rainforest. Imagine the difference restoring populations of whales and other wildlife can have for our world and the consequences if we don’t.”

Dr James Robinson, Director of Conservation, Wildfowl & Wetlands Trust (WWT) said:  “Decisions made at this year’s global biodiversity talks will decide the future of our natural world.  Nature restoration targets have been made and missed for decades. We can’t afford another lost decade for nature. We need UK ambition and domestic action to translate into a global deal at COP15 that will truly turn the tide for nature, before it is too late.

“Nature is a strong connected web of interlinked species, weakening one strand increases the risk of the whole system collapsing. With the role of species such as curlews and the wetland plant, the common reed, alone showing their importance for sustaining life on this planet, we need UK climate and nature leadership at these crucial COP15 talks.”

Below are some key facts and statistics on the 10 species in the report: