As part of a year of activities to celebrate their 10th Anniversary, wildlife charity Buglife Scotland hope to rediscover some of Scotland’s rarest ‘lost’ bees, bugs and beetles. And spotting spotted pot beetles got the year off to a flying start. 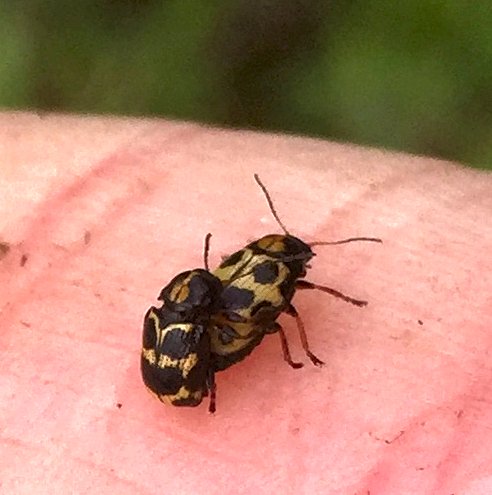 Following a series of beetle identification and surveying workshops funded by Scottish Natural Heritage, Buglife staff and volunteers visited the only Scottish sites for the Six- spotted pot beetle (Kirkconnell Flow National Nature Reserve in Dumfries and Galloway) and the Ten-spotted pot beetle (Black Wood of Rannoch in Perthshire) to try to ‘spot’ these beetles.  The previous last records from Scotland being 17 years ago.

Buglife Scotland’s Conservation Officer Dr Scott Shanks said “It’s a real dream come true to find both of these amazing wee beetles! Thanks to our sharp-eyed and freshly-trained volunteers who were the first to spot them; and many thanks also to pot beetle expert Dr Ross Piper for his invaluable advice!

Only a few individuals were found at each site, in limited areas of suitable habitat. Specific management recommendations are now being prepared for landowners to try to protect these rare spotty beetles.”

Pot beetles are leaf beetles with an amazing lifecycle. The larvae live most of their lives inside a pot made of their own droppings, which provides camouflage and protection from predators.

Almost all of the UK’s 19 species of pot beetles are rare, while the Six-spotted and the Ten-spotted pot beetles are classed as Endangered.  Threats include habitat loss and changes in woodland management. The UK’s remaining small isolated populations are vulnerable to fires, flooding, disease and overgrazing. 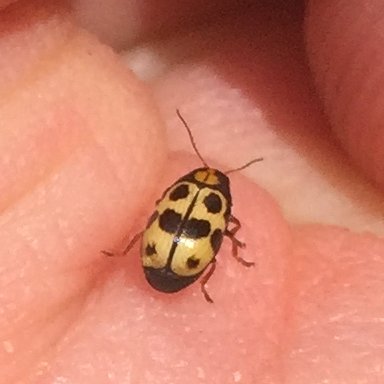 After laying each of her eggs, the female pot beetle holds them in her back legs and spends time covering them with a waxy coating and some of her own droppings in a process known as ‘scatoshelling’. The process can take up to 10 minutes per egg, but it’s time well spent as the covering has been shown to deter predators.  If the female is disturbed while laying eggs she will abandon the egg without coating it, but these are far more likely to be eaten by ladybirds, lacewings and other predators than the coated eggs.  Once she has coated the egg she lets it drop to the ground from the leaf or flower head that she is sitting on.

Once the larvae hatch they stay within their protective egg-case feeding on fallen leaves from their food plant. The larvae enlarge the neck of their pot as they grow using their own droppings.  Beetle larvae lack the hardened wing cases of the adults, so the pot acts almost like a snail shell, providing protection and probably some camouflage. Despite this, it appears that predation of larvae is high, with ground beetles and small mammals such as wood mice taking many of the larvae. Pot beetle larvae tend to feed on leaf litter under the host plant, although they will sometimes eat fresh leaves later in their development.  Larvae of some species can take up to 2 years to fully develop, where upon they seal up their larval cases and pupate, emerging as adult beetles a few weeks later.