Notable feature: Black body with red and orange markings on abdomen and thorax, pale creamy white face, two pairs of densely veined wings with a brown patch at the base.

Where in the UK: Isolated sites in the English Midlands and the Scottish Highlands

Dragonflies are an ancient group dating back 300 million years. These insects are characterised by large multifaceted eyes, a long slender body and 2 pairs of wings which lie open when at rest. Dragonflies often come in a variety of beautiful iridescent colouring.

The White-faced Darter (Leucorrhinia dubia) is a small, dark dragonfly with a pale, creamy-white face and is one of the rarest dragonflies in the UK.  Males and females tend to be distinguishable by their colour variations; females are black with yellow markings, whereas males are black with red-orange markings.  Both have small brown patches at the base of their wings.

The males are territorial around water but both males and females can often be spotted roosting on trees and bushes up to 50 metres away from a bog.

The White-faced Darter can be seen through the summer months catching smaller prey on the wing, consuming their catch on a perch away from the bog.

The White-faced Darter is extremely susceptible to the destruction of lowland peatbogs. They require acidic pools with a proliferation of Sphagnum at the edges in which to lay their eggs. They also require scrubland away from the peat bog in which to roost. They have suffered a decline in the last 40 years as 90% of lowland peat bog in Britain has been lost due to excessive cultivation and pollution. Removal of Sphagnum moss for commercial purposes has also decimated populations by destroying eggs within it. The White-faced Darter is now found in only half of the sites in which it used to inhabit throughout the UK. There are some signs of a comeback though with an introduction in Cheshire off to a successful start.

The White-faced Darter has been identified as a Criteria B species through our Important Invertebrate Area (IIA) work.

Buglife is working to increase awareness of invertebrates and the White-faced Darter through specific projects, including our current Falkirk Lowland raised Bog Restoration Project and previous Slamannan Bog Restoration and Saving Auchenines Moss, but we need your help!

If you would like to volunteer for our current project please get in touch with our Peatland Conservation Officer Melissa Shaw.  There are volunteering opportunities ranging from practical workdays to take out scrub and trees on the bogs, to survey work across the bogs for wildlife and to monitor water levels both before and after restoration work has been carried out.

Find out about our peat bogs and what you can do to help this species by going #PeatFree; check out our blog “Don’t get bogged down with peat…”

Join a recording scheme and log your finds – send any records/sightings to the British Dragonfly Society or download the iRecord app and get recording! 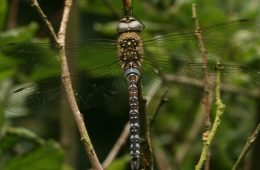