One of the rarest invertebrates in the world, the Spiky yellow woodlouse is only found on St Helena, a 47 square mile remote island in the South Atlantic Ocean.

Where in the UK: Only found on St Helena, UK Overseas Territories

St Helena has been dubbed the ‘Galapagos of the South Atlantic’, on ac­count of its unique biodiversity. A wealth of weird and wonderful plant, bird and invertebrate life has evolved following the island’s volcanic birth, some 14 million years ago. Many of the species found here are global endemics – found nowhere else on Earth, including more than 400 invertebrate species.

Similar in size to the Channel Island of Jersey, St Helena is tropical – and is populated by UK citizens. St Helena is one of the UK’s ‘Overseas Territories’, which means the UK government is partly responsible for looking after its wildlife and now that wildlife needs our help.

Very little is known about the biology of the Spiky yellow woodlouse, but we do know that woodlice, which are isopods, are closely related to shrimps and other crustaceans. Unlike the woodlice we’re all familiar with, that forage largely on the ground and feed on dead organic matter, the 1cm long Spiky yellow woodlouse climbs trees. They spend their time scrambling amongst dripping wet Tree fern thicket and Black cabbage tree woodland, possibly feeding on spores.

Unfortunately their unique habitat in the high altitude cloud forests, are drying out and so now only a small area of suitable habitat for the Spiky yellow remains.

Accidentally introduced European woodlice are potential competitors; these ‘Brits abroad’ throng the leaf litter and could potentially be competing with the Spiky yellow. Introduced mice and rats are also likely to be feeding on the native invertebrates.

The St Helena National Trust is working with partners including Buglife, on a project called Bugs on the Brink. Our aim is to explore the ecology and current distribution of endemic invertebrates, in a bid to direct conservation action and bring the Spiky yellow woodlouse, and others back from the brink. 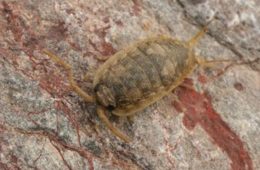