Turn a log or dig the garden in certain areas of the UK and you might be surprised by some crazily jumping arthropods-Landhoppers! Though they might resemble giant fleas, they are actually crustaceans, cousins of the sandhoppers on our beaches.

Where in the UK: Mainly South West England and Southern Wales

Looking closer at their segmented bodies, you may notice a resemblance to woodlice. However, landhoppers  are flattened from side to side, and of course can jump, aided by strong rear leg s. Besides woodlice, landhoppers are the only crustaceans in the UK which live entirely on land.

Landhoppers are detritivores, feeding on decaying plant matter. They come out at night, when they can travel tens of metres in search of food and mates.

The most common landhopper species in the UK, Arcitalitrus dorrieni has various common names including  Lawn shrimp and Woodhopper, but perhaps the most revealing is  Australian mud shrimp. A.dorrieni is indeed from across the world, originating in New South Wales and Southern Queensland. The landhoppers almost certainly arrived as stowaways amongst imports of exotic plants from the region, hiding in the soil in pots or within the trunks of tree ferns.  The first UK record of A.dorrieni is from the Isles of Scilly in 1924, where it particularly favours the litter under Australian tree ferns planted there.

A.dorrieni has arrived several times in the UK. It is now widespread across the south coasts of Cornwall, Devon and Wales, with scattered records north to the Hebrides in Scotland. Though mostly found around gardens, they can spread into other habitats such as woodland.

The impact of landhoppers on our native species is not yet known. They are very efficient processors of leaf litter, known to consume almost 25% of leaf litter in an Irish woodland.  Thus they may compete with and exclude other detritivores, changing the formation of the soil, which can have significant impacts on ecosystems. Even if landhoppers themselves prove not to be harmful, the importation of non-native invertebrates with plants is a concern for the UK’s ecosystems.

Records of landhoppers can be submitted to the BMIG Recording Scheme. 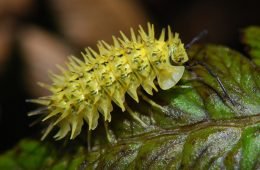