Sea fans are part of the marine invertebrate group known as Cnidaria which includes sea anemones, corals and jellyfish. They may look like plants but are, in fact, colonies of tiny anemone-like creatures. They have a hard skeleton made of protein and calcium carbonate. The pink sea fan (Eunicella verrucosa) is found in the UK but is generally uncommon. Colonies have been recorded in west Wales, Cornwall, north and south Devon, the Isles of Scilly and Dorset. It is also recorded in Ireland. Where the pink sea fan flourishes (south Devon and Cornwall), it is estimated that several million maybe present.

Notable feature: Slow growing and can reach 50cm high. It usually attaches itself to a rocky sea bed at depths greater than 20m and orientates itself in one plane, at right angles to the prevailing water current.

Although it is called the pink sea fan, its colour can vary from colony to colony, sometimes appearing pink, sometimes coral-pink and sometimes white. Indeed, in the Isles of Scilly about 14% are white and in Ireland all are white but we do not know why!

The pink sea fan is slow growing and can reach 50cm high. It usually attaches itself to a rocky sea bed at depths greater than 20m and orientates itself in one plane, at right angles to the prevailing water current. As colonies can’t move to find food they have to wait till it floats by! They are filter feeders: anemone-like polyps emerge from warty bumps along the branches and filter out plankton and suspended organic matter.

The pink sea fan provides an important habitat for other animals. The rare sea fan anemone (Amphianthus dohrnii) lives on the sea fan and the sea fan sea slug (Tritonia nilsohdneri) will happily make a meal of it. In fact the sea slug can match its body colour to the colour of the pink sea fan it is living on.

As the pink sea fan is nationally rare it is now protected under provisions in the Wildlife and Countryside Act 1981 and it is a Biodiversity Action Plan Priority Species. Marine Protected Areas set up by Natural England, such as that near Lundy, will hopefully protect pink sea fans from the damaging effects of scallop dredging, allowing their numbers to increase. 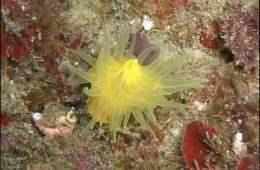 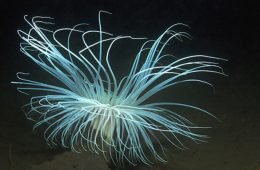