No, not an unusual Christmas tipple, but a ground beetle that comes out at night to feed on wormwood seeds. The Wormwood moonshiner (Amara fusca) varies from a pale bronzy brown to dark brown. It is a type of ground beetle (carabid) that lives on sparsely vegetated, dry, sandy or gravelly soil – such as on heathland or sand dunes. While the adults climb about in plants at night feeding on seeds, the larvae live on the ground and are predatory. This species has a very restricted UK distribution, with highly specialised habitat requirements.

Notable feature: Varies from a pale bronzy brown to dark brown. It is a type of ground beetle.

The adults don’t like just any seeds, it has a special liking for the seeds of a rare plant, the Breckland wormwood (Artemisia campestris). Most rare plant eating bugs are rare because the combinations of features they need in their habitats are rare, their host plants are usually quite frequent. The Wormwood moonshiner seems to be unusual in being a rare invertebrate that lives on a rare plant. The beetle has occasionally been found on the closely related and much commoner Mugwort (Artemisia vulgaris), but its viability on this plant is uncertain, it may not be able to survive on this plant in the long term. Certainly current sites in the Suffolk Brecks where the beetle survives have populations of the Red Data Book listed Breckland wormwood and the plant also survives in the dunes at Crymlyn Burrows near Swansea where the beetle was last seen in the mid 1800s.

The beetle is also unusual in coming out to feed on seeds in cold weather, it has been observed eating seeds at -6oC!

There are very few historical records – West Kent in 1942 and before that Swansea, South-west Yorkshire and South Northumberland in the 1800s. In 1993 two entomologists Mark Telfer and Brian Eversham discovered a thriving population on a breckland roadside. This was the first confirmation of a breeding population in Britain.

In Great Britain the Wormwood moonshiner is classified as Red Data Book (RDB) 1 – endangered – in 2007 it was also added to the UK Biodiversity Action Plan list of species requiring urgent conservation action and is now protected by the Natural Environment and Rural Communities Act 2006.

Any animal that is as rare as the Wormwood moonshiner is highly vulnerable to extinction. Threats have included development (one of the main breckland sites sits on a small plot of land in the middle of an industrial estate), mechanical disturbance caused by road widening, and mowing and deer grazing which prevent the food plant forming seeds.

The Wormwood moonshiner is apparently rare or scarce over most of western Europe and it is representative of the rich but declining fauna associated with bare, sparsely vegetated and ruderal plant communities.

Buglife is working with experts to develop a plan of action that will make the future of this beetle more secure. 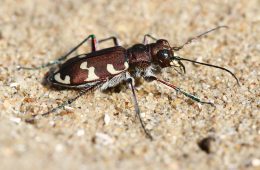