Notable feature: When airborne they fly in a sluggish manner above hedgerows and grass, with their long legs dangling down.

Where in the UK: Common and widespread across the UK

The St Mark’s Fly (Bibio marci) is a species of true fly, known as Hawthorn Flies. This species belongs to the family Bibionidae and 20 species from this family are found in the UK.  St. Mark’s Flies (Bibio marci) are so called because they emerge around St Mark’s Day, on 25th April every year, and can be seen in flight in May. They are found around woodland edges, hedges, rough grassland and wetlands and can be seen throughout the UK in spring.

The shiny black male St. Mark’s Flies are around 12mm in length with clear wings, have large eyes and long dangling hind legs. The male’s eyes are divided by a groove and have separate connections to the brain; this allows the males to use the upper eye part to look out for females and the lower part to monitor their position in relation to the ground, allowing them to hover in the same position.  You can often see them when they congregate in big swarms flying slowly, up and down, at around head height – trying to attract females.

Female St Mark’s Flies are bigger than their male counterparts, at around 14mm in length, with smoky brown wings and much smaller eyes and legs.

The St Mark’s Fly is considered an important early pollinator for fruit trees and other plants as they feed on the nectar. 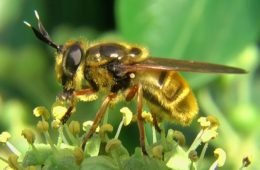