Did you know that in your garden there might be a fearsome predator, a fast carnivore, with modified legs near the front with which it can inject venom into its prey? It is of course, the Common centipede! But don’t worry, only smaller insects need to fear this hunter.

Notable feature: Brownish red in colour with long antennae at the front and a pair of long legs at the back which reach out almost as far as the front antennae, making it quite difficult to tell which end is which.

The Common centipede is brownish red in colour with long antennae at the front and a pair of long legs at the back which reach out almost as far as the front antennae, making it quite difficult to tell which end is which. This question becomes even more difficult as the Common centipede can crawl backwards almost as easily as it can crawl forwards, using these long, back legs as another pair of feelers.

The Common centipede has made itself at home throughout the British Isles, they can be found in gardens, in woodland, at the seashore and will happily move into your greenhouse or tool shed. They are found at all times of year but are most numerous in spring and autumn.

Their body is quite flat which makes them ideally suited to hiding underneath logs and stones, this helps them to keep their bodies cool and moist and has the advantage of hiding them from birds and toads, who would enjoy eating them for lunch. During the hot weather Common centipedes will often burrow into the soil to help themselves to keep cool.

Because they spend so much time in the dark, Common centipedes do not need to see very well, so they do not rely on sight when they are hunting their prey. Instead they use their antennae to sense prey and feel their way around.

When they sense a potential meal, usually a smaller insect or spider, or sometimes an earthworm or slug, they can suddenly sprint very quickly and then pounce on their victim, using their modified legs as fangs and injecting venom into their prey so that they can over power it.

The Common centipede can be a friend to the gardener, coming out at night to feast on soil pests. 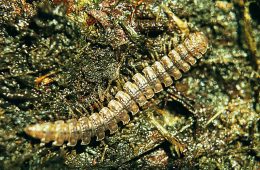