You might be surprised to see quite a few wasps around during late summer. But why do they like your jam sandwiches so much?

Where in the UK: Throughout the UK

What do wasps do?

How many species of wasp are there?

There are approximately 9,000 species of wasp in the UK. These include the parasitic wasps, some of which are so tiny, they can barely be seen without a micropscope. 250 of these are the larger wasps which have have a stinger. Only nine of these are social wasps which form large nests, the majority are solitary and cause no upset to humans.

The Common wasp (Vespula vulgaris) is found throughout the UK in almost all habitats, including woodland and urban areas. They are nicknamed jaspers in the Midlands, deriving possibly from the Latin for wasp, vespa, or from the similarity in looks to the striped mineral jasper.

As the commonest UK wasp they are easily identified by most people. Adult workers (always females) measure 12-17mm whereas the queen is around 20mm. Iconic black and yellow stripes give a clear warning to other animals that these insects are dangerous. With the abdomen split into six segments, one black/yellow stripe on each, the Common wasp is very similar to the German wasp (Vespula germanica). The key difference is that Common wasps lack the three black dots on the head and distinct black dots on the back as they merge with the back stripes.

In late spring, large wasps can be seen. These are queens who are looking for suitable nest sites. These can be deserted mammal holes, cracks in walls or holes in trees. The nests are made from chewed up wood and wasp saliva which creates a paper-like material.

A queen will begin by building a cylindrical column known as a petiole which is covered by a chemical produced by the queen which repels ants. When she’s finished, she produces a single cell and surrounds it with a further six cells, giving the cells their characteristic hexagonal shape. She continues building cells in a layer until she has 20-30 then lays an egg in each. Once the eggs have hatched she divides her time between feeding the larvae and nest building.

At full size larvae spin a cover over their cell until they have developed into adult workers. These are the smaller wasps, seen later in the summer, who are gathering proteins to feed the larvae and sugars to feed themselves. It’s this need for sugar that attracts them to your jam sandwiches or fizzy drinks. With enough adults fully grown the queen can focus on reproduction and is then fed by the workers in the nest. Each nest may contain 5,000-10,000 individuals and is spherical in shape.

In late summer new queens and male drones emerge from the nest. Each colony contains only one queen and after mating in late autumn the new queens overwinters in holes or other sheltered locations. Colonies only last one year and once the new queens departs all the other wasps in the colony die.

Why are wasps after my picnic?

Towards the end of September the nests are at maximum capacity, with lots of adults and few larvae. This means that there will be lots of wasps visible but also affects what food they look for. While the adults feed on nectar the larvae are fed on insects. When feeding larvae, adults obtain a small, sugar rich droplet of liquid from the young. With fewer larvae the adults don’t need to look for as much protein but do need more sugars and carbohydrates. It is because of this need for carbohydrates that wasps might go for your crisps rather than your jam this month.

Why do wasps sting?

Wasps have a sting to allow them to capture and immobilise their prey (such as aphids, caterpillars, flies and spiders). They may also sting to defend their nest. 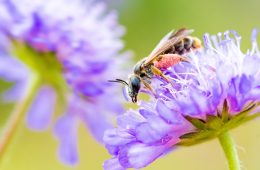