The large Hobo spider is often referred to as a brownfield site specialist where it may be found living under stones and in vegetation. The Hobo spider (Tegenaria agrestis) is a large spider in the Agelenidae family. In Britain the family are commonly known as ‘funnel weavers’ or ‘cobweb spiders’ because of their web building technique. When building a web, they spin a tubular retreat that may be funnel shaped and from this they extend either a small collar of silk or a small to large sheet. There are approximately 500 species of Agelenidae worldwide, 28 of which occur in northern Europe. The spinnerets can be seen clearly in most funnel weavers as posterior spinners that are of two segments are longer than anterior spinners.

Notable feature: Multiple chevron (v-shaped) patterns on the abdomen with the chevrons pointing towards the head

The Hobo spider is similar in appearance to its larger relative the Common house spider (Tegenaria duellica). Both species have multiple chevron (v-shaped) patterns on the abdomen with the chevrons pointing towards the head (this may be hard to see in some individuals). The Hobo spider can be easily identified in the field by an expert using a hand lens. Species of spider are identified by looking at the epigynum and male palps (reproductive organs) that are easily seen in the adults.

Females are typically larger than males and she will remain stationary in her web while males search for a mate. Males of this species stand at the entrance to the funnel web and tap it in a specific pattern to attract the female. Females have been known to kill males and if she shows any sign of aggression he will retreat. If the female shows no signs of aggression, the male will gradually approach her and once mated, the male will leave in search of other females. The female produces one to four egg cases (each one holding 50-100 eggs) that she attaches to the underside of rocks and other objects using silk.

This species of spider is typically found amongst vegetation and under stones in grassy areas and at waste ground. It has also been recorded alongside railway tracks and it is thought that this may be how the species has spread across Britain.

As this species is commonly found in waste ground it has been referred to as a brownfield site specialist. Brownfield sites are excellent habitats for Hobo spiders, especially those with rubble scattered across the site as spiders will live underneath the rubble. Brownfield sites are areas that have been altered by human activity and then abandoned, and include old houses, abandoned industrial areas, quarries and disused airstrips.

Lack of management combined with a low nutrient content often creates an open mosaic of habitats such as species rich grassland, bare ground and early successional habitats. This mosaic of habitats provides a home for a number of animal and plant species. Open mosaic habitat on previously developed land is a UK Biodiversity Action Plan habitat.

Where are they found?

Hobo spiders are native to Europe and were first recorded in Britain from Wilverley plain in Hampshire in 1949. The species was first described in Western Europe in 1802 by the naturalist C. A. Walkenaer under the scientific name Aranea agrestis as in Western Europe they live in fields, woods and under stones (agrestis is Latin for field).

The Hobo spider has been increasing its range in Britain and is found across England and Wales although it is local in its distribution. In Scotland, it has been recorded in only five locations (Bo’ness and Grangemouth in Falkirk, two locations from the Edinburgh area and near Dingwall in the Highlands). This species of spider has recently been collected at a brownfield site in Bo’ness and Larbert in Falkirk which is a new location for this species.

The Hobo spider has been introduced accidently into North America where it was first reported in Seattle, Washington in the 1930’s. The spider has since spread in distribution into the neighbouring states Oregon, Idaho, Montana and Utah.

In Europe, the Hobo spider typically doesn’t enter houses due to competition from its larger relative the Common house spider. In America the Hobo spider has few competitors and readily enters houses. 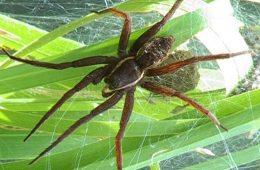