As you walk along a riverbank on a warm summer day you might see some small insects dancing above the water. They are probably mayflies and they may have been dancing over that river for thousands of years!

The common name ‘Mayfly’ is quite misleading because this group of insects can appear throughout the year. In fact, at one point they were called dayflies due to some of the species having an adult life of a single day. The common name comes from the habit of one species, Ephemera danica, which emerge as adults when the Mayflower or Hawthorn is in bloom.

Although some species only live for as single day, or even just a few hours as adults, there are individuals or species that can live a bit longer than that. In fact most of the life of a mayfly is spent out of sight as a nymph.

Mayflies start life as an egg on the bed of the river, before hatching into a nymph. The nymphs feed on algae and other vegetable matter on the bed for up to two years in some species, before emerging from the surface of the water as an adult.

Mayflies are unique as insects in having two winged adult stages. After emerging from the water they fly to the bank where they shelter on the underside of leaves or in the grass. They then moult again, leaving behind their drab ‘dun’ skin to reveal their shiny ‘spinner’ skin. Following this moult they fly back to the water and form mating swarms dancing above the surface.

Mayflies were one of the first winged insects, with fossils dating back over 300 million years – long before the dinosaurs! There are 51 species of mayfly known from the British Isles today and they range in size from less than 5mm to over 20mm.

Mayfly larvae, and the mayfly adults emerging from the water, are a vital source of food for many other freshwater creatures, especially fish such as trout and salmon. Mayflies, and other riverflies, help ensure that our rivers, lakes and streams are home to a rich variety of wildlife.

Populations of mayflies and other riverflies are declining in the UK. As a member of the Riverfly Partnership Buglife is working with other organisations to try and understand the cause of these declines. Once the causes are known action can be taken to reverse the declines and protect beautiful mayflies. 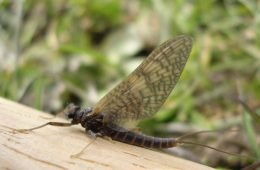