Millipedes belong to a group of invertebrates called the myriapods (centipedes are also members of this group). They inhabit the land and are secretive animals living in soil and leaf mould, and beneath stones, logs and bark.

Notable feature: Millipedes have between 40 and 400 legs

Millipedes have many legs, but not a thousand as their name suggests – most common species have between 40 and 400 legs. Millipedes have long segmented bodies with two pairs of legs on each segment, hence their scientific name Diplopoda (diplo = two, poda = legs) – centipedes have only one pair of legs per segment. Most millipedes feed on decaying vegetation. Compared to centipedes they are slow moving, their bodies are adapted for pushing through the soil or under stones.

When threatened, most millipedes will roll into a coil protecting their legs on the inside and offering only their body armour to the potential predator, some are also able to release substances that taste or smell foul as a defence.

Millipedes have bodies that are adapted for pushing through soil or under stones. Their body forms are similar to bulldozers, with lots of short legs, ideal for forcing open nooks and crannies in soil and leaf-litter. There are several variations on this theme:

Ram bulldozers. The White-legged snake millipede (Tachypodoiulus niger) tucks its head down and rams its way forwards on lots of closely spaced very short legs. The trunk of the cylindrical body is flexible, tough, yet sufficiently as not to be compressed (the double segments give strength and leg-power).

Pill bulldozer. The Pill millipede (Glomeris marginata) has short a hemi-spherical body and rather few legs. This is fine for rolling up into a defensive ball but serious burrowing is out of the question. These live in leaf-litter that is not over-compacted.

Tunnellers. The Pointed-head millipede (Polyzonium germanicum) forces its small head into crannies, then uses its muscles to pull in the progressively widening front body segments until the tunnel is forced wide enough for the rest of the body. The trunk ‘segments’ are rather more compressible for push-pull action.

Wedgers. The Flat-backed millipede (Polydesmus angustus) uses its flat head to lift open cracks in the soil or leaf litter and then work their flat body into crevices by opening up a wedge-shaped space. The legs are somewhat longer than other millipedes since less pushing power is needed in what is generally rather loose material.

To find out more about marvellous millipedes why not visit the British Myriapod and Isopod Group website: http://www.bmig.org.uk/ 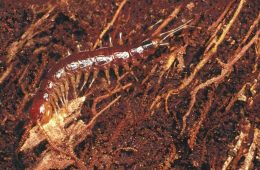