Notable feature: Brown band of colouring found around the opening of the shell

As with all snails and slugs Brown-lipped Snails are gastropods, which means ‘stomach foot’ and it is easy to see why. At first glance it does look as if the snail moves around by crawling on its stomach, but in fact the anatomy of the snail is very different and the stomach is actually protected inside the shell.

Brown-lipped Snails are quite common throughout most of Britain, with the exception of the far north of Scotland. They like to live in a variety of habitats including grassland, hedgerows, woodland, sea cliffs and gardens. They prefer areas with plenty of moisture such as within thick undergrowth or in damp, dark soil, however in moist weather they will come out and climb up plants and trees, making them easier to spot.

Brown-lipped Snails are air breathing land snails, they breathe through a hole called a pneumostome near the shell opening, snails open and close their pneumostome as they breathe. Closing this is important as it allows the snail to ensure that moisture does not escape through evaporation. It is important for the snails to maintain moisture to prevent their bodies from drying out. If the atmosphere is particularly dry the snail will retract into its shell and shut down into a period of inactivity known as estivation until the moisture in the atmosphere increases.

The colours and banding on the shell of the Brown-lipped Snail can vary greatly. The shell can be a very light yellow to a very dark brown, or even a pink or orange variation. They could have 0-5 bands (or stripes). Over the years many studies have taken place to try and identify why the shells look so very different from each other, but no definite answer has been settled upon. One likely contributing factor may be for camouflage, whether this is a thick, dark woodland or lightly grassed area. Camouflage would indeed be very useful for the snails, as they are fed upon by birds, small mammals and even invertebrate predators.

Although snails are able to withdraw into their shells for protection from predators, unfortunately this is not always successful. A main predator of the Brown-lipped Snail is the Song Thrush who has learnt to crack open the snail shell by striking the snail against a stone. Some Song Thrushes have also been known to eat the entire snail, shell and all!

The snail shell is made mainly of calcium carbonate, with a small amount of protein. This makes it a good source of calcium for some predators and increases the desirability of the snail as a tasty and nutritious meal. As a snail grows and ages, the snail shell also grows and the shell walls harden to give greater protection to the snail inside.

Brown-lipped Snails are neither male nor female, each snail has the organs of both sexes, they are hermaphrodites. However the snail still needs to mate with another in order for each to fertilise their eggs. After mating has taken place, a Brown-lipped Snail will then bury its eggs in loose soil. They produce a huge amount of eggs, sometimes over 100 at one time. Very few of the snail eggs will actually hatch as they are so vulnerable to predators. However for those that do, you would see a tiny, newly hatched Brown-lipped Snail measuring around 5mm, complete with a thin and colourless shell. The baby snail needs to build up its calcium supply and strengthen its shell as soon as possible, so it begins this as soon as it has hatched by eating the eggshell it has just emerged from. As snails mature they are able to ingest a steady supply of calcium from their food and from the dirt in order to keep their shell strong and to help it to repair itself if damaged.

The Brown-lipped Snail eats many different types of plant such as nettles and buttercups, and although it will eat fresh vegetation it usually prefers plants which are dead or decaying and therefore is often not the nuisance to gardeners that people may initially believe.

For more information on snails and slugs visit the Conchological Society 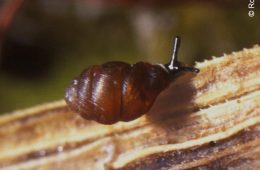 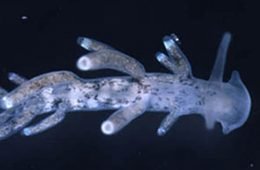