If you go down to the woodland glade, you might be lucky enough to see a Violet oil beetle (Meloe violaceus). They began their emergence in March and will soon peak in numbers making April the perfect time to find one of these iridescent insects.

Of the four remaining species of British oil beetle, the Violet oil beetle has the most varied habitat preferences and can be found in woodland edge habitats, glades and rides, upland moorlands and on flower-rich grasslands.

Violet oil beetles have a striking appearance despite their underlying black coloration, as light is refracted off their lustrous carapace to give them a purple, blue or green sheen. When they first emerge as adults, their abdomen is small and compact but, as they gorge themselves on lesser celandine (Ranunculus ficaria) and soft grasses, their abdomen becomes distended and can extend some way beyond the tip of their wings. They can often be found sunning themselves on paths and females are sometimes seen digging burrows in patches of bare ground, in which they lay their eggs.

Juvenile Violet oil beetles are tiny, black, louse-like creatures that emerge in spring and lie in wait on flowers for solitary mining bees that visit the flowers to collect nectar and pollen. The triungulins take advantage of the mining bees, firstly by hitching a lift on their back, and again in the bees’ nest, by eating the food so diligently collected by the bee for its own young; the beetle equivalent of a cuckoo. Despite their coercive nature, Violet oil beetles are important for conservation as they are indicators of strong mining bee populations and of high quality, wildflower-rich habitats.

Once widespread across much of the UK, recent records collected by Buglife in 2011 showed that the distribution of Violet oil beetles has dramatically shrunk, particularly from the east of England. If you were to draw an imaginary line directly north from the Isle of Wight, the area to the east of this line has had only three records since the end of the 1960s! Declines are also evident across the North of England, the Midlands and Wales. The remaining strongholds for the Violet oil beetle are the South West, the Peak and Lake Districts and Scotland.

Violet oil beetles are strongly dependent upon the long-term maintenance of wildflower-rich, semi-natural grasslands. It is the loss of these habitats to development, agricultural intensification and changes in land use that are thought to have caused their decline. 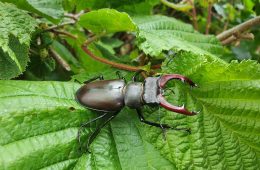