The eccentric beatuy of the Puss moth caterpillar, turns into an elegant Puss moth. The Puss moth (Cerura vinula) is covered with soft cat-like fur, hence the name Puss moth. The striking nature of the beautiful black and grey marbled markings, make it quite an easy moth to identify.

Fairly widespread throughout the UK, Puss moths can usually be seen flying at night between the months of May and July. As herbivores, they mainly eat leaves from trees such as poplar, sallow and willow. Their diet, means they are most likely to be found in habitats such as woodland, park areas or even in your back garden.

The Puss moth lays a small numbers of eggs on their food plants. When the caterpillar first emerges from the egg, it’s black in colour with what looks like a long double tail extending from its abdomen.

The caterpillar then goes through several different periods of change known as Instars. Within a short period of time the caterpillar turns into a much larger, green caterpillar with a dark coloured patch, on its back.

The markings of the Puss Moth caterpillar’s face are what make them so distinctive, giving the impression of a red ringed cartoon-like face.

The caterpillar can camouflage itself effectively among the willow and other trees which it feeds on, but if agitated it has a fascinating defensive strategy. It will wave around the two long whip-like appendages from the tail. If further deterrent is still needed, the caterpillar also has the ability to squirt formic acid, similar to that found in bee stings, from its thorax in order to deter the would be attacker.

Unfortunately, many predators are still not put off eating the Puss Moth caterpillar, or indeed the moth itself, and they often fall victim to a hungry bird, bat or frog.

Just before it is ready to pupate, the caterpillar goes through a final instar, changing colour again to orange and then purple. The caterpillar then spins a cocoon of silk around itself and uses bits of bark from a tree as camouflage to keep hidden for the winter.

The cocoon is extremely strong and is one of the toughest made by any UK moth.The caterpillar will safely spend the winter inside the cocoon completing its final transformation until ready to emerge as a beautiful Puss moth. 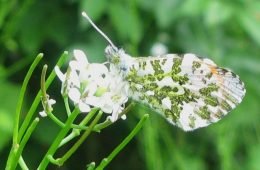 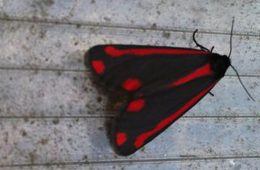