There are over 110 species of Digger wasp in Britain. As the name suggests female Digger wasps burrow into the ground when nesting. This group belong to the order Hymenoptera which includes all ants, bees, wasps and sawflies.

Digger wasps are a type of solitary wasp meaning that females make a nest for her own young. This nesting behaviour is different to social wasps, as female social wasps co-operate with their sisters and their mother in the maintenance of a colony that may well contain hundreds or even thousands of workers as well as a queen.

Digger wasps resemble social wasps in appearance with their yellow and black patterns although they can be distinguished from social wasps as the wings are not folded lengthwise when at rest.

The general life pattern of a female Digger wasp involves preparing a nest, provisioning it with prey as food for her offspring, laying her eggs and then sealing up the nest. When preparing a nest a female will dig a burrow using spiny brushes on her legs. This burrow may be up to 30cm deep or more depending on the species. The tunnel usually branches at the end and each branch will have a separate egg laid in it. The energetic cost to the female burrowing so deep is repaid as an advantage to her offspring. The surface of bare ground has a desert-like microclimatic condition. By day the bare ground gets very hot in the sun and at night the surface can cool very fast. By digging a deep tunnel the changes in temperature are less severe and this helps the eggs develop.

A food store for the hatchlings

When an egg hatches the resulting wasp larva eats the prey stored for it in the nest. The prey provisioned to the young will vary depending on the species of Digger wasp and can include aphids, fleas, beetles and froghopper nymphs that are plucked from their protective cuckoo spit. The female wasp catches prey and paralyses it with her sting. The sting of a female Digger wasp is not used as a defensive mechanism and is used only to paralyse her prey when she is collecting food for her young. Some species of Digger wasp take parental care further and instead of mass provisioning their nests and then abandoning them, the female leaves a single prey item and will return to the nest when the egg hatches with fresh supplies.

After feeding on the prey the larvae will pupate and eventually emerges from the nest as an adult wasp. This adult wasp will then look for a mate and if the wasp is a female, she will begin to prepare and provision a nest for its own eggs.

Digger wasps tend to nest in soil, usually in open sandy areas or vertical banks of light soil or sand. In areas of bare ground with several female digger wasps nesting in the same area, nesting holes may be numerous. The spoil heaps left beside their holes by some species look a little like a volcano. Solitary bees nest in similar situations to solitary Digger wasps and nest aggregations between them are hard to distinguish when there are no adult insects about.

Where to see Digger wasps

In general, wasps are summer insects and each species has its own season. Adults tend to fly only in sunshine and their activity depends very much on the weather and also the time of day. To find Digger wasps it is often necessary to look in the right place at the right time such as at nesting and feeding sites.

Brownfield sites provide important habitat for Digger wasps as the lack of management at these sites often creates an open mosaic of habitats including areas of bare ground, species rich grassland and early successional communities. This mosaic of habitats allows Digger wasps to complete their life cycle at the same site as both bare ground that provides nesting site and species rich grassland that provides a valuable source of nectar for the adults wasps are present. 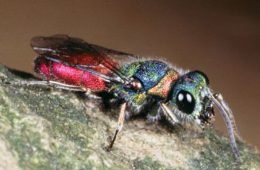