As always at this wonderful time of year, when our eight legged friends start to show up everywhere, seeming to appear out of nowhere (good news for some, bad news for many others) Buglife’s Bug of the Month is a spider. This spider season we’ve chosen the Wasp spider. Not just any old plain black spider, this is a rather exotic looking creature. It is not sure where the Wasp spider originates from, however it does largely inhabit the Mediterranean. From here it has scurried itself all the way across to England where it has colonised.

Where in the UK: Southern England 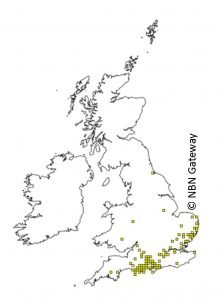 No need to be alarmed

Wasp spiders are a very distinctive looking species. They have black and yellow stripes across their bodies, looking like no other species of spider found in the UK. Their colour and pattern mimics the colouration of a wasp, which is where the Wasp spider gets its name from. Their appearance is actually a defence mechanism, as by disguising themselves as wasps, predators leave well alone believing them to be a wasp and not a spider. Clever! Their bright appearance may seem dangerous, but don’t be fooled as these mesmerising little creatures are actually harmless! And in fact are related to the Common garden spider.

To match their unique look, Wasp spiders also have a unique web. They are orb-shaped, like a Common garden spider, but they have a single zig-zag pattern of silk through the centre rather than all over. Their webs aren’t always like this. When Wasp spiders are young, their web is a circular zigzagging design. When the spider grows older, it makes both the circular and straight zigzag pattern through its web, until it eventually only makes the straight zigzag pattern.

The zigzag design is created to reflect UV light and attract pollinating insects like flies, bees and moths!

As is the case with many spider species, the females rule the roost!-Or web in this case! Female Wasp spiders are much larger than males, measuring in at an impressive 14-17mm, whilst males only reach up to between 4 and 6mm. When it comes to mating, males play a daring and dangerous game. Males will wait at the edge of a web until the female has moulted into a mature form then will dive in to make their move. Females actually eat males whilst they are mating, so doing it at this precise moment is key to the hopeful survival of males as the female’s jaws are still soft. However, luck isn’t on their side much and the females still eat the males alive, soft jaws or not!

Wasp spiders are mainly found in grasslands but can also be present in coastal areas, farmland, heathland, woodland, towns and gardens.

The Wasp spider was first recorded in England in the 1920’s.