Where in the UK: Six sites in Southern England - four in Sussex, one in Kent and one in Wiltshire

The Wart-biter is a large bush-cricket, adult’s measure between 31 and 37mm and the ovipositor (egg-laying organ) of the females can measure up to 21mm. It has large, dark eyes and is typically dark green, often with dark brown or black blotches on the body and wings. Its large and powerful hind legs give this species a frog-like appearance.

Like all bush-crickets, the Wart-biter Bush-cricket ‘sings’ or stridulates by rubbing its wings together (grasshoppers sing by rubbing their long legs against their wings). Its fairly loud and distinctive song consists of a series of rapidly repeated clicks in short bursts and often lasts for several minutes.

Even though they have wings, Wart-biter’s normally move about by walking. They rarely fly as they are too heavy and their wings are not large enough; most can only fly very short distances, at best 3-4 meters.

The Wart-biter is omnivorous, feeding on a range of herbs and insects, including other grasshoppers.

Wart-biter bush-crickets are elusive creatures and males only sing during hot, sunny and still weather.

Find out more about the crickets and grasshoppers of Britain and get involved with recording these fascinating creatures with the Orthoptera Recording Scheme.  Join a recording scheme and log your finds – download the iRecord app and get recording! 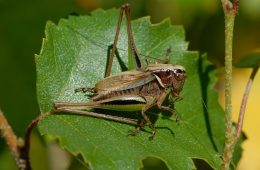 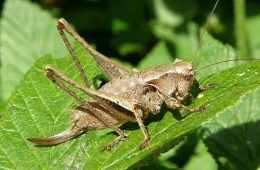