Mesotrophic lakes in Britain are largely confined to the margins of upland areas in the north and west and are characterised by having a narrow range of nutrients. Several of the largest and most important lakes in the UK, including Lough Neagh and Lower Lough Erne, were once classified as mesotrophic but are now classified as eutrophic and therefore not included in the UK action plan. Bassenthwaite and Derwentwater in the Lake District are two of the best examples of mesotrphic lakes in England.

Mesotrophic lakes with their mixture of hard substratum, often clear water, but also plenty of submerged and emergent plants, are among the richest of all caddis habitats. Other macroinvertebrates are well represented, with particularly important groups being dragonflies, water beetles, stoneflies and mayflies. Aquatic marginal and terrestrial transition zones can be rich in ‘terrestrial’ groups such as flies and beetles.

• Pollution – Nutrient enrichment (eutrophication) has a major impact on mesotrophic lakes, causing increased growth of aquatic algae and macrophytes. If eutrophication reaches a threshold, the submerged aquatic flora will deteriorate and may disappear, thus impoverishing the invertebrate fauna. Many aquatic invertebrates are in themselves very sensitive to pollution. Pollution may have many sources, including discharge of sewage effluent, forestry and agricultural run-off and excess food and waste products from fish farms within the lake and in the streams feeding it. Airborne water acidification is also a factor in some upland catchments.

• Increased water-borne sediments – Activities such as ploughing, afforestation and peat cutting can increase soil erosion with a consequent increase in water-borne sediments. In suspension, these cause turbidity and reduction in light levels, inhibiting the growth of rooted aquatic plants and increasing the likelihood of algal blooms. Settled sediments may continue to introduce nutrients into the water column and the lake bed substrate may change to the detriment of bottom dwelling invertebrates.

• Fisheries management – Fish introduced for angling can have an adverse effect on lake ecosystems by eating the invertebrates that graze algae and keep it in check. If bottom-feeding fish such as carp are introduced, they will disturb the sediments, leading to turbidity and the release of nutrients which will encourage algal blooms. Escapees from fish farms can also have a damaging impact.

• Recreation – Water-borne traffic can damage aquatic plants at the point of launch, or through bankside wave erosion, passage through strands of vegetation, or the cutting action of propellers. Increased turbidity from boat-wash may also compound macrophyte loss. This again may promote unwanted algal growth.

Discharges of effluent from waste water treatment works and other point sources of pollution should be strictly controlled to ensure that the quality and quantity of these discharges does not pose a threat to invertebrate species present. The RDB snails Myxas glutinosa and Vertigo lilljeborgi are thought to be adversely affected by water enrichment and algal scum.

The water catchment as a whole should be viewed as important; diffuse inputs resulting from agricultural practices on land adjoining inflowing streams or rivers will affect the water quality of the lake. Every effort should be made to work with neighbouring landowners to reduce nutrient inputs and maintain the quality of water entering the lake.

Public feeding of ducks on mesotrophic waters may also have a significant impact on nutrient levels. The relic population of the water boatman Glaenocorisa propinqua in the Moat Pond, Thursley may have been lost as a result of eutrophication from a high wildfowl population artificially maintained by illegal feeding.

Excessive draw down of water levels as a result of abstraction for water supply or hydro-electric generation should be avoided.

Maintain a mosaic of habitats

Many aquatic insects spend much of their adult life away from water, so both the aquatic and terrestrial habitats in the vicinity of any mesotrophic lake should be managed sympathetically. A mosaic of habitats will provide the widest range of niches for invertebrates. Examples of such sub-habitats include:

This will have the greatest invertebrate interest and should consist of a good mixture of vegetational structure and height to accommodate the greatest range of species. A rich fauna of aquatic and marginal invertebrates needs open sunny conditions for warmth and good vegetation growth. Moderately shaded areas, however, with light levels sufficient to support a flourishing water margin-terrestrial herb layer, will support a largely different invertebrate assemblage and should not be overlooked.

Some areas of bare mud or sand, for example areas of poaching by livestock, may be beneficial to species that require patches of vegetation-free submerged and terrestrial margin, but it is important to ensure that excessive trampling does not cause extensive damage to vegetation.

The habitat quality surrounding a water body is extremely important. Aquatic insects often have habitat requirements beyond the immediate vicinity of the water. Flower-rich areas provide nectar and pollen for adult hoverflies or foraging areas for dragonflies, whilst taller vegetation offers shelter. Dragonflies such as the Brilliant emerald (Somatochlora metallica)and Scarce chaser (Libellula fulva) use woodland for roosting and feeding, so the presence of wooded areas near lakes is important to maintain populations of these insects. Club-tailed dragonflies (Gomphus vulgatissimus) spend most of their adult lives away from water. Downy emerald dragonflies (Cordulia aenea) are mostly confined to ponds within woodland. Creating wooded corridors between such water bodies may enable these insects to disperse more easily and colonise new ponds.

Vegetation is often removed to provide better access for anglers, but this is not good practice for the conservation of some invertebrates. For example, the Brilliant emerald dragonfly (Somatochlora metallica) is predominantly found in mesotrophic or weakly acidic lakes where tree cover surrounds at least part of the lake margin and provide essential shelter. However, heavy shading restricts the amount of open water and limits the suitability of the shallow water margins, so a balance is needed at sites where this species is found, otherwise sites become less attractive to adult dragonflies by reducing the amount of suitable patrolling and oviposting sites. Few other invertebrates have a requirement for such shaded waters.

Carry out any management on a rotational basis

Any ‘all or nothing’ approach to management such as comprehensive bank clearance, dredging and weed removal is highly detrimental to invertebrate populations. Work undertaken should be done on a piecemeal basis, with only small areas managed in any one year to ensure continuity of habitat. For example, work liable to damage marginal vegetation should aim to leave a mixture of species and sward heights to enable insects such as stoneflies and mayflies to breed. Such work should be undertaken on short stretches such as 50 metres in each 200 metres in any one year. Dense vegetation is a requirement for the Scarce chaser dragonfly (Libellula fulva); the roots provide niches for the aquatic larvae, while the foliage offers shelter and emerging, basking and resting sites for the adults. It is essential that such vegetation is allowed to remain and is not over-cleared.

Dredging should be carried out with care; removal of sediment will take with it many aquatic invertebrates such as dragonfly nymphs and caddis larvae. It also has the effect of removing larval habitat. This is thought to be the cause of the loss of some populations of the Downy emerald dragonfly. If dredging is thought to be necessary, it should only be done on a rotational basis, removing sediment from a fraction of the pond or lake in any one year.

Any water management that reduces the incidence of periodic lake shore flooding is likely to be harmful to populations of the RDB snail Vertigo lilljeborgi. Disturbance or removal of any debris left by such floods could also damage populations of the snail. 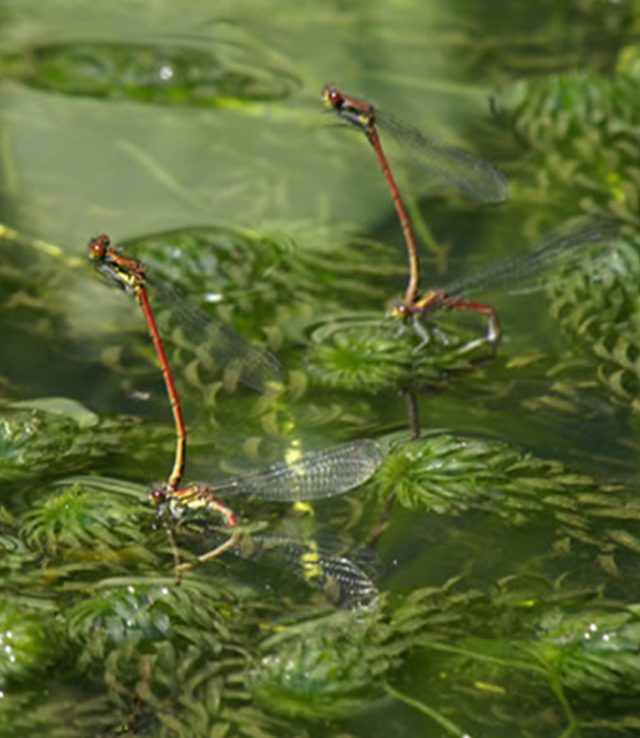