Lowland beech and yew woodland spans a variety of distinctive vegetation types reflecting differences in soil and topographical conditions. Beech can grow on both acidic and calcareous soils, although its association with yew tends to be most abundant on the calcareous sites. These woods have been managed historically as coppice, coppice with standards, wood-pasture, high forest and minimum intervention. They are often found as intricate mosaics with other woodland communities

Beech and yew woodland is of particular value to saproxylic invertebrates, that is, those that require dead wood for all or part of their life cycle. BAP Priority species include the Violet click beetle (Limoniscus violaceus). Beech woodland can also be of importance for fungi. The fungal fruiting bodies in turn are the living quarters of the larvae of a large fauna of fungus gnats, other flies, and beetles.

Deer and squirrel damage
Damage to younger trees (10-40 yrs old) and saplings by grey squirrels, rabbits and deer can result in tree death, disruption of normal age structure, lack of regeneration and shifts in species composition.

Uniformity
Uniformity of age class structure in much beech high forest increases the susceptibility of the beech population to damage from droughts and storms.

Lack of appropriate management
Allowing trees to become so crowded that ground flora and its invertebrates are completely shaded out over substantial areas.

Development
This can lead to fragmentation of the habitat.

Pollution
Air pollution may cause ‘decline’ in beech trees (increasing their susceptibility to disease), and damage to epiphyte populations.

Climate change
This may potentially result in changes in the vegetation communities. 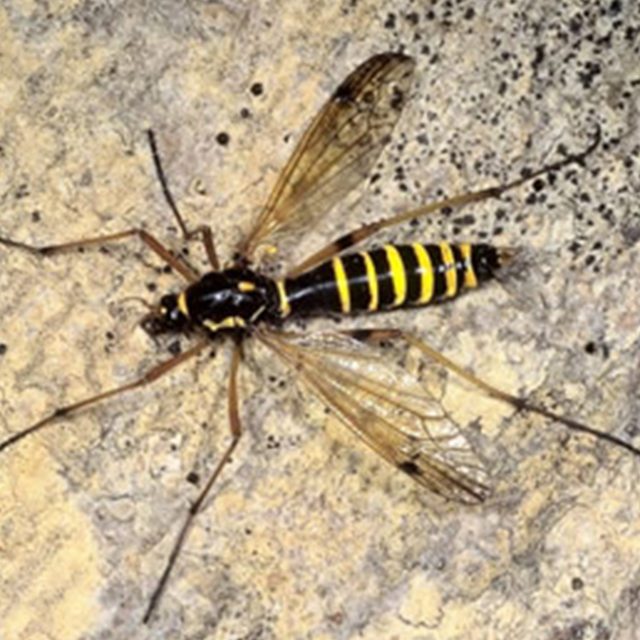 Maintain ‘naturalness’
Destructive or drastic modification of any site which is likely to have had a long and relatively stable history should be avoided and the ‘naturalness’ of woods should be maintained. However, poor habitat structure can result from non-intervention management in many woodlands. A return to traditional methods of woodland management may be of benefit to many species, but this should be considered carefully and stands of old growth beech and yew should be retained.

Maintain structural diversity
As in most woodlands, structural diversity is very important. A good mix of mature woodland and scrub of varying age and structure will provide a greater range of habitat niches for invertebrates. It is important to ensure that there is a continuity of habitat types, so ensuring that there is continued recruitment of new trees is essential.

Maintain a range of dead wood
One of the most important resources for rare invertebrates in lowland beech and yew woodland is dead wood. The more dead wood a tree contains, the more valuable the habitat it provides in the form of a variety of different niches for a range of invertebrates. Continuity of supply of dead wood in all conditions and situations is vital because many saproxylic invertebrates such as the comb-horn cranefly Ctenpohora pecticornis need very specific conditions – moisture content can be a critical factor.

Removal of fallen timber for firewood or for aesthetic or public safety perceptions is extremely damaging to saproxylic populations. Plentiful dead timber and freshly produced off-cuts should ideally be left where it falls or stacked in piles, preferably in shaded locations, although a range of both shaded and sun-baked dead wood should be encouraged. The assemblages associated with shaded or damp dead wood can vary from those associated with dry, sun-baked dead wood. Placing rotting wood in the full heat of the sun will cause it to dry out and become hard, fungal decay within the wood will cease, and the wood becomes unsuitable for all but the special invertebrates of such timber.

Long-term planning may be necessary to ensure that new veteran trees come of age as existing ones die. Pollarding can be important for extending the lifespan of old beech trees, but some forms of tree surgery, such as the unnecessary felling of limbs, removal of dead fallen wood or wholesale felling of living veteran trees can be very damaging. Trees with top-heavy limbs should be pruned rather than removed and any fungus-infected trees or those with sap runs should be retained, as they are a valuable resource to many invertebrates. Rot-holes should not be drained or filled; they provide essential breeding habitat for species such as the Yellow-ringed comb-horn cranefly (Ctenophora flaveolata) In areas where there is little deadwood it may be beneficial to increase this by ring barking limbs.

Fungi should also be encouraged since they are important hosts for species such as the cranefly Achyrolimonia decemmaculata, and the presence of fungal hyphae within dead wood prepares it for the diet of many saproxylic invertebrates. The gathering of fungi for cooking, and including the restaurant trade, can substantially deplete the essential breeding conditions required for the survival of the fauna.

Post-mature beech trees in open situations or at forest margins are likely to provide more potential saproxylic niches for species such as the Violet click beetle (Limoniscus violaceus) than closely-spaced timber. The creation of artificial larval habitat such as re-erecting hollow trunks (or placing bins) filled with composting sawdust may extend the life of such habitat.

The removal of beech for the furniture industry harvests timber before the trees reach over-maturity, reducing the availability of saproxylic habitat; wherever possible, a tolerance of veteran beech trees within a wood will enrich the invertebrate habitat.

Tree Preservation Orders can be a valuable tool for protecting old trees and the Ancient Tree Forum and local tree officers can provide advice and support.

Maintain open spaces
Open areas such as rides and clearings provide sunny sheltered places for flowering plants and shrubs that provide nectar and pollen for a wide range of insects. Well-structured rides should show a gradation from low vegetation or bare ground in the centre through tall grass and herb communities to scrub and finally to trees. Curved or irregular rides will be more sheltered from wind than straight ones. Similarly, shrubby woodland margins should be encouraged, grading down to lower vegetation. Edge habitats are exploited by a number of invertebrates, notably many spider species.

The shading out of rides and clearings through neglect can be detrimental. However, rides should be managed in rotation a small fraction at a time, not mown or cut all at once. Consideration should also be given to their use; regular use of rides by heavy machinery or horses churns the ground and is very damaging to invertebrates.

Consider light grazing
Grazing can be beneficial to species like the Violet click beetle, as it manages tree development and can help to maintain open spaces within the woodland and keep bracken in check. However, excessive grazing by mammals in woodland can eliminate the ground flora and the shelter and humidity this provides. Inputs of dung from grazing animals can benefit species such as the scarce woodland muscid fly Hydrotaea borussica and the dung beetle Aphodius zenkeri, which requires dung in moist shady sites.

Species composition
Beech supports a wide variety of species, and many saproxylic invertebrates favour the wood of ancient beech trees. Most of the very few confirmed British records for the rove beetle Atheta fussi are from beech-dominated woodland sites. The beetles Atheta benickiella and Oxypoda amoena are also more frequently found in beech woodland than any other habitat type. The RDB snail Helicodonta obvoluta is typically and most abundantly found in stands of old beech/yew forest on the steep, north-facing scarp slopes of W Sussex and E Hampshire. Conversion of old beech/yew woodland to conifers has caused the loss of some invertebrate populations. The dense leaf litter created by beech is also of importance for a number of species such as the harvestman Nemobius sylvestris. Disturbance to accumulated moss, ground litter and ground surfaces should be minimised.

If tree species other than beech and yew are present they should be retained, but may need management. A few woods contain under-storey box scrub as an ancient feature; such sites are important for a special invertebrate fauna of rare species confined to box.

Shrubby species such as hawthorn produce flowers that are a good nectar and pollen source for adult hoverflies and other insects.

Other plants supporting rare invertebrates include stands of wood spurge(Euphorbia amygdaloides), the food plant of the notable lacebug Oncochila simplex and Bugle(Ajuga reptans), host plant of the notable bug Tingus reticulata . This prefers plants growing in the open and has also been associated with mullein (Verbascum spp). The fly Chyliza vittata requires populations of orchids, in particular in shaded conditions. The loss of good orchid sites through change of land use could be detrimental to this species.

Mosses on trees, rocks and along streams support species such as Helina vicina, a muscid fly, and trees supporting moss and other epiphytic growth should be retained.

Leave wet areas undisturbed
Excessive woodland disturbance resulting from tree clearance, for example, can damage stream courses and areas of seepages. Wetter areas should be left as undisturbed as possible, as they are fragile and easily damaged.

Interesting fact
Where the Roman snail (Helix pomatia) is found in calcareous woods, the greatest threat to its survival is the collection of the snails by amateur cooks or for commercial use in restaurants. This practice has already caused local extinction of known colonies.