Coastal saltmarsh develops on the middle and upper tidal levels where fine sediments offer a substrate in a low energy stable environment conducive to the growth of salt tolerant flowering plants. Once established, the plants slow water flow and thus increase sedimentation.

Usually saltmarsh establishes in sheltered situations within estuaries and behind coastal shingle bars, but some examples are on the open sea shore. Hence, saltmarshes act as a valuable natural flood-defence, dissipating wave energy and reducing scour.

Saltmarshes have a special invertebrate assemblage, including the commoner species that support large numbers of wading birds and wildfowl.

BAP Priority invertebrates found in this habitat include the ground beetles Amara strenua and Saltmarsh shortspur (Anisodactylus poeciloides) and the Narrow-mouth whorl snail (Vertigo angustior). The bee Colletes halophilus nests in the high transition zone but forages for pollen and nectar on sea aster out on the saltmarsh.

Erosion and coastal squeeze
Many saltmarshes, especially those in the south-east, are dwindling in size as they erode at the seaward edge whilst being prevented from migrating inland by fixed flood defence walls

Invasive hybrid cord-grass Spartina anglica
This hybrid has been extensively planted to stabilise mudflats as a prelude to land reclamation and is spreading along the coast, often producing extensive monoculture swards of reduced wildlife value.

Abandonment of traditional grazing
Previously grazed saltmarshes will, if abandoned, become dominated by rank grasses in the mid to upper marshes, which would otherwise be more botanically diverse.

Overgrazing
Close grazing by sheep is highly unsatisfactory for most invertebrates.

Pollution
Oil spillages, waste tipping, sewage effluent and agricultural run-off will all alter the flora and fauna of the saltmarsh.

Destruction of natural terrestrial transition
Many saltmarsh invertebrates specialise in the upper zones of saltmarsh, some of which are only tidally inundated by the highest tides.

Avoid disturbance
The best management technique for an undisturbed saltmarsh is to allow it to undergo the natural processes of erosion, deposition and plant growth without intervention. In unmanaged saltmarshes, there will be a series of successional stages with a varied structure.

Management should aim for low levels of human disturbance, such as trampling, which damages the saltmarsh flora and could contribute to erosion.

Maintain a natural hydrological regime
The natural zones of vegetation on a saltmarsh result from the degree of inundation by incoming tides. Plants with a higher tolerance to salt and inundation are found on the lower reaches of the marsh, whereas those with a more limited tolerance will be found in the upper marsh. Tidal water flows in and out of the areas of saltmarsh through creeks and runnels that add to the structural diversity and provide a range of microhabitats for invertebrates. It is therefore important to ensure unimpeded tidal patterns on sites and that creeks are not canalised or infilled.

For the rare Narrow-mouth whorl snail (Vertigo angustior), any habitat management which alters the delicate hydrological requirements of the snail (either by flooding or drying sites) are to be avoided. In general terms any flood defence works on salt marsh transition zones could destroy V. angustior populations. Sea walls built on this zone on the margins of many East Anglian salt marshes may have destroyed many suitable V. angustior habitats in the past.

The Essex emerald moth (Thetidia smaragdaria maritima) became extinct largely because its foodplant was either smothered during construction of flood embankments or its tidal zone was pushed to an exposed height on the embankments.

The remaining fauna of sea wormwood is equally precarious, as are other elements of high zone situations.

Freshwater seepages and streams onto salt marsh should be valued, as they provide rare invertebrate habitat, offering areas of reduced salinity where grasses, rushes and reeds may grow.

The RDB cranefly Dicranomyia complicata appears to be restricted to such areas on upper saltmarshes; ditching can destroy the special ecology.

Ditches on the landward side, behind existing flood embankments, may produce a range of brackish conditions and vegetation types that support rare species or species more typical of fen. If management of such ditches should prove necessary, then rotational treatment should be adopted.

Retain all successional stages
A full transition of vegetation types on saltmarsh should be retained. The upper marsh will tend to have the highest invertebrate interest, but these areas are most at risk from development, reclamation or agricultural improvement. The retention of a mosaic of subhabitats within a maximal development of upper saltmarsh and terrestrial fringe is therefore likely to be beneficial for most scarce or threatened saltmarsh invertebrate species.

Areas of gradual transition to terrestrial conditions will favour species less tolerant of saline conditions and provide winter hibernation sites, while brackish dune slacks and the zone between saltmarsh and sand dune are also important. Such areas should be conserved and kept free of excessive disturbance.

Pools and salt pans with gently sloping sides should be maintained, but excavation of new pools and scrapes destroys established habitat and the associated rich fauna and will almost certainly damage invertebrate populations.

Retain biodegradable tidal debris
Biodegradable tidal debris such as wood and seaweed supports many invertebrates and should not be removed. Management should aim to reduce public disturbance of the strandline and avoid any attempts to “tidy up” the material. Barbecue fires using driftwood and other material should be discouraged.

Consider managed retreat
In areas of saltmarsh suffering from coastal squeeze, species in this habitat are at high risk of being lost. Managed retreat, entailing the deliberate breaching of man-made sea defences or modification to allow ingress of tidal waters and encourage saltmarsh establishment, may be a viable option at some of these sites. Rare and scarce coastal saltmarsh invertebrates stand to benefit from this generation of larger areas of habitat in the upper saltmarsh – terrestrial fringe zones. However, any plans would need to cater for a continuity of special niches, and managed retreat could raise particular problems with seepage marsh, where the hydrology may not adjust.

Retention of flood embankments, even when breached, as retreats for species less tolerant of flood conditions is likely to be advantageous, and such refugia for hibernation may be of advantage to some species.

Prevent excessive scrub encroachment on high transition zone
Scrub will generally only grow above the very highest tidal limits and avoid salty soil. It may provide valuable shelter for some insects of both saltmarsh and terrestial origin, and indeed on the coast may have its own special faunas. However, terrestrial open grassland and herb habitats are also of value as transition habitats. Thus where scrub is already a feature of the transitional areas, there is a need to strike a balance and allow for a mosaic of scrub and terrestrial open habitats.

Avoid introduction of grazing on unmanaged sites
Grazing should never be introduced onto a previously ungrazed saltmarsh, Some saltmarsh plants such as sea lavender, sea aster and sea wormwood are very sensitive to grazing and will gradually be replaced by saltmarsh grasses, resulting in a reduction in plant diversity which would be detrimental to the invertebrate fauna.

Continue light grazing on previously grazed sites
Many saltmarshes have been subject to grazing management for some time. In these cases, it is important to continue, as a cessation of grazing would result in dense growth of grasses that would out-compete other saltmarsh plants and shade out pools and areas of bare mud that provide invertebrate habitat.

Grazing should be light to maintain high floral diversity, with cattle as the best option. Heavier grazing should be avoided, especially by sheep and horses unless stocking rates are very low, as it creates a uniform short sward which impoverishes the invertebrate fauna, although it is often used on saltmarshes managed for grass-eating birds. Any grazing or cutting of vegetation should be left until late in the season to allow flowering plants to set seed and associated invertebrates to complete autumn activity. 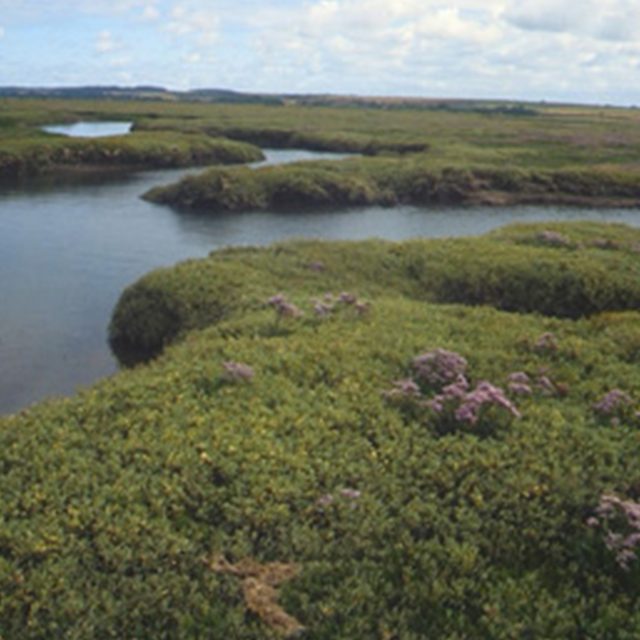