Lowland calcareous grasslands are developed on shallow lime-rich soils generally overlying limestone rocks, including chalk. These grasslands are now largely found on distinct topographic features such as escarpments or dry valley slopes and sometimes on ancient earthworks in landscapes strongly influenced by the underlying limestone geology. More rarely, remnant examples occur on flatter topography such as in Breckland and on Salisbury Plain. They are typically managed as components of pastoral or mixed farming systems, supporting sheep, cattle or sometimes horses; a few examples are cut for hay.

Agricultural intensification
Use of fertilisers, herbicides and other pesticides, re-seeding or ploughing for arable crops

Decline in mixed farming
Farm specialisation towards arable cropping has reduced the availability of livestock in many lowland areas. The result is the increasing dominance of coarse grasses such as tor grass Brachypodium pinnatum) and false oat grass (Arrhenatherum elatius) and invasion by scrub and woodland, leading to losses of calcareous grassland flora and fauna

Over-grazing
Over-grazing can be a problem and is sometimes associated with supplementary feeding, which can cause localised sward damage due to trampling and long-term nutrient enrichment

Development
Activities such as quarrying, road building, housing and landfill 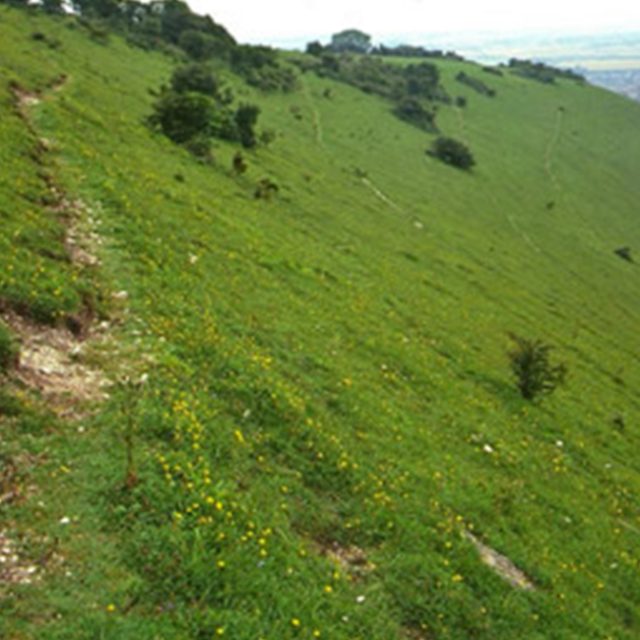 The principal threat to most specialist invertebrate species is likely to be from encroachment of scrub and the development of rank vegetation that may result from a lack of grazing. Maintenance of grazing regimes, by rabbits or by livestock, and holding back or setting back succession by other means are probably the main management tools to be used to benefit invertebrates. However, whilst botanists have tended to put priority on short turf, important invertebrate faunas also occur in intermediate or long sward, and calcareous scrub. Many invertebrates require a mosaic of vegetation structure and composition so are very vulnerable to a management strategy that results in uniformity, as can happen with single objective grazing or mowing.

Maintain habitat diversity
Management should aim to achieve a good mosaic of sub-habitats, including areas of short turf, bare ground, long grass and a limited amount of scrub. The more open areas attain high temperatures in summer and support many species restricted to the south of England. Small patches of bare soil, as along soil-creep or sheep trampled mini-terraces, can be enough for these species, but the adjacent plants may need to be a few centimetres in growth or longer.

The richest invertebrate faunas are in intermediate length turf with a reasonably open structure and floristic diversity (such as Bromus erectus grassland). A few invertebrate communities are restricted to the longer turf. Over-wintering invertebrates will require the protection of tussocky vegetation in which to shelter at this stage. Some leaf-hopper bugs and the wart-biter bush cricket actually thrive in the presence of tor-grass.

Sward height is of crucial importance to many of the rarest species of chalkland butterfly, which require very specific conditions. Some calypterate fly species are also very choosy about sward height – a knowledge of the species present on a site will allow land managers to formulate an appropriate management plan.

Maintain plant species diversity
Many species require a specific part of the foodplant for larval development and so are unlikely to thrive in grassland which is too closely cropped by grazing. Plants should be allowed to flower in order to provide pollen and nectar for adult insects such as butterflies, bees and hoverflies.

Several insect species recorded from calcareous grassland appear to require foodplants not typical of this habitat and may therefore be confined to marginal habitats such as ungrazed disused quarries within chalk grassland. Others need scrub edge; some bees, such as the Blue carpenter bee (Ceratina cyanea), nest in the cut ends of bramble stems.

Maintain grazing or cutting
An open and varied sward is best achieved through grazing by cattle or sheep in combination with rabbit grazing, the latter tending to create the areas of disturbance preferred by many of the species. However, it is vital to avoid overgrazing, as a uniform expanse of close-grazed short turf will support only an impoverished invertebrate fauna. Cessation of grazing may result in the encroachment of rank grasses or scrub, which will shade out the specialist chalk or limestone flora.

On some sites a mixed regime of heavy and light grazing may be needed to create areas of bare ground, short turf and longer grassland including tussocks. Sites should be managed in rotation, preferably over three years, so that plants can flower, develop seeds and produce seedlings. This is important for the larval development of some fly species and many other insects.

If it is necessary to cut sites this should be done late in the season, not before August, in order to retain seeds of grasses and herbs. Some cuttings should be left on site.

Prevent excessive scrub invasion
Scrub encroachment needs to be controlled and this is best achieved before dense thickets are formed. Goats used by the National Trust on the Isle of Wight are an effective management tool in controlling scrub, reducing its cover and creating bare areas of chalk. However, it is important to achieve a balance between maintaining open sunny areas whilst retaining scattered scrub on sites. Some rare invertebrates are associated with invading scrub species and some local craneflies on this habitat are dependent on the leaf litter beneath scrub.. Clearance of scrub from calcareous grassland may thus be detrimental to these species both by allowing the soil to be too exposed for larvae and by reducing shelter for adults.

Keep inputs to a minimum
Avoid the application of artificial fertilisers, which will reduce the plant species diversity of a site and encourage denser foliage to over-shade the ground.

Maintain the local hydrology
Very rarely on the chalk, and very locally on other limestones, there are seepages and springs associated with lowland calcareous grassland. These can be especially important since this habitat is so scarce for the special invertebrates. It is very important to maintain hydrology; ground water abstraction and surface ditching can easily ruin such sites.

Find out more about habitat management of chalk downlands in the Publication section.