England has the principal resource of chalk rivers in Europe. These English rivers are all located in the south and east, from Dorset to East Yorkshire. Chalk rivers have a characteristic plant community, often dominated in mid-channel by river water crowfoot and starworts, and along the edges by watercress and lesser water-parsnip. They have low banks that support a range of water-loving plants.

All chalk rivers are fed from groundwater aquifers, producing clear waters and a generally stable flow and temperature regime. These are conditions which support a rich diversity of invertebrate life and important game fisheries, notably for brown trout and salmon.

Most chalk rivers have ‘winterbourne’ stretches in their headwaters. These often run dry, or partially dry, in late summer because of lack of rainfall recharging the aquifer. A characteristic range of invertebrates are adapted to these conditions.

Where the river corridor (approximately 50m either side of the river) is not affected by intensive agriculture, fisheries or urban development, rich fen vegetation has developed. This is maintained by extensive cattle grazing or naturally progresses to carr woodland. These areas are particularly rich in insect life and breeding birds.

Excessive water abstraction
Excessive abstraction, mainly for public water supply from the Chalk aquifer, has contributed to low flows on a number of chalk rivers, resulting in the drying out of upper sections and riparian zones, accumulation of silt and changes in the aquatic vegetation structure. Artificial measures to counter these effects, such as sealing the bed with concrete or narrowing the channel, have negative ecological consequences.

Physical modification
Many chalk rivers have had their beds dredged and lowered and have been confined to specific channels for flood defence, drainage, navigation, and other purposes. As ‘low energy’ systems, chalk rivers have been less able than other river types to reassert their channel structure.

Pollution
Enrichment and de-oxygenation resulting from sewage discharges and nutrients leaching from ploughed land into groundwater. Excessive growths of blanket-weed may occur on what were previously crystal-clear waters

Intensive fisheries management
Regular ‘weed’ cuts in the channel; fencing off and mowing of strips along the bank; infilling and stabilisation of banks; removal of unwanted fish species (e.g. pike, grayling); and high stocking with farm-reared trout.

Maintain a mosaic of habitats in the vicinity of the river
Habitats associated with chalk rivers and streams such as fens, water meadows, unimproved grassland and carr are all important for invertebrate species such as the RDB Desmoulin’s Whorl snail, which is found in the marginal fens of several chalk rivers. Maintaining a mosaic of such habitats will greatly increase the invertebrate diversity.

Prevent over-abstraction of water
A catchment management plan should be drawn up, taking into account the needs of important invertebrate species. For example, the proposed RDB stonefly Paraleptophlebia werneri is found in winterbournes and requires both a wet and dry phase over the yearly cycle.

Maintain side channels
River engineering works that may result in the elimination of side channels should be prevented. Over-abstraction can also have an adverse effect on side channels by reducing the flow of water, or causing the flow to dry up completely in summer, threatening populations of the mayfly Kageronia fuscogrisea.

Avoid discharge of nutrients
Nutrient enrichment, such as that caused by excessive nitrate from agricultural fertilisers leaching into the water, promotes the growth of algal blooms and causes eutrophication, which may be damaging. Every effort should be made to ensure that diffuse pollution from agricultural practices or abstraction for water supply and irrigation does not threaten the survival of rare species nor diminish natural biodiversity.

Discharges of effluent from waste water treatment works and other point sources of pollution should be strictly controlled to ensure that the quality and quantity of these discharges do not pose a threat to aquatic invertebrates.

Maintain natural river bank profiles
River engineering works resulting in canalisation or the creation of steep banks and hard profiles are highly damaging to many aquatic invertebrates. Practices such as the embankment of river margins with woven willow hurdles or the removal of marginal irregularities maintain a fast flow of water which will remove fine marginal sediments, a habitat requirement of the RDB Freshwater pea mussel (Pisidium tenuilineatum). More natural, gently sloping margins with a soft sediment interface provide a greater range of suitable habitat niches for species such as craneflies and the RDB rove beetle Stenus longitarsis. The creation of a berm or shelf at the predicted water level during any re-profiling operations will help to create such advantageous conditions.

Some trampling of river margins by grazing cattle may help to maintain shallow sloping profiles and areas of bare muddy ground, but care must be taken to ensure that excessive trampling does not result in over-siltation or eutrophication from faeces and urine.

Setting flood embankments back from the river in areas where the riverside habitat is not of high conservation value will mean that the river itself can remain untouched, minimising any damage caused by flood defence work.

Retain aquatic, marginal and riverbank vegetation
Traditional river restoration techniques may be particularly damaging for invertebrate species that rely on the presence of marginal and riparian vegetation to provide shelter and emergence sites. Weed cutting has been suggested as the cause of the serious decline of the River Test’s best known caddis fly the Grannom (Brachycentrus subnubilus), nationally a common species. If fishing areas or ‘swims’ are to be cut in the natural vegetation their location should be rotated on an annual basis to allow re-growth of the vegetation.

Work liable to damage marginal and riverbank vegetation should aim to leave a mixture of species and sward heights. Such work should be undertaken on one bank only and on short stretches such as 50 metres in each 200 metres in any one year, with cut material gathered and stored in heaps in non-sensitive areas. When mowing paths on the river bank for access by anglers, leave an uncut fringe of tall herbaceous vegetation as a screen between the path and the river to provide shelter for adult invertebrates.

Riverside trees are an important component of the chalk river habitat, providing shelter for a number of rare and nationally scarce species including the fly Cosmetopus dentimanus and Scarce chaser dragonfly (Libellula fulva). The White clawed crayfish also favours sites with overhanging bankside vegetation. However, if the river or stream becomes completely shaded by overhanging trees, this can have an adverse effect on aquatic invertebrates, so it is important to maintain a balance.

Minimise damage caused by dredging
Dredging a river can be very damaging to species such as the RDB Scarce chaser (Libellula fulva), the nationally scarce White-legged damselfly (Platycnemis pennipes) and the mayfly Heptagenia longicauda, so dredging should only be carried out from one side of the bank and undertaken in short stretches in rotation to allow recolonisation. This will also minimise any damage done to the bank by machinery.

Retain areas of silt beds
Traditional river habitat enhancement which relies on removal of silt beds may remove invertebrates and lead to invertebrate drift. It can also lead to a reduction in cover, loss of emergence sites and removal of food, all of which are likely to have a deleterious effect on species such as the nationally scarce mayfly Caenis pusilla. Areas of silt naturally accumulating along river margins, especially on the inside of bends (“point bars”) should be left and only short sections (20-30 metres) of gravel should be cleaned at a time to minimise the impact on associated plants and animals. Cutting of water crowfoot and other aquatic weeds causes the loss or redistribution of silt beds which support the nationally scarce mayfly Brachycercus harrisellus.

Retain dead wood both in and out of the water
Saturated dead wood provides habitat niches for a range of invertebrates, such as caddis flies and the White clawed crayfish (Austropotamobius pallipes). Removing submerged timber and fallen trees from a river will have a negative impact on these species. Fallen trees may also help to reduce erosion of banks and slow the flow of water in some sections of the river.

The scarce digger wasp Crossocerus walkeri nests in dead wood in sunny situations near high quality rivers and streams, provisioning its cells with mayflies. Retaining standing dead wood on river banks will protect populations of this and other invertebrate species. 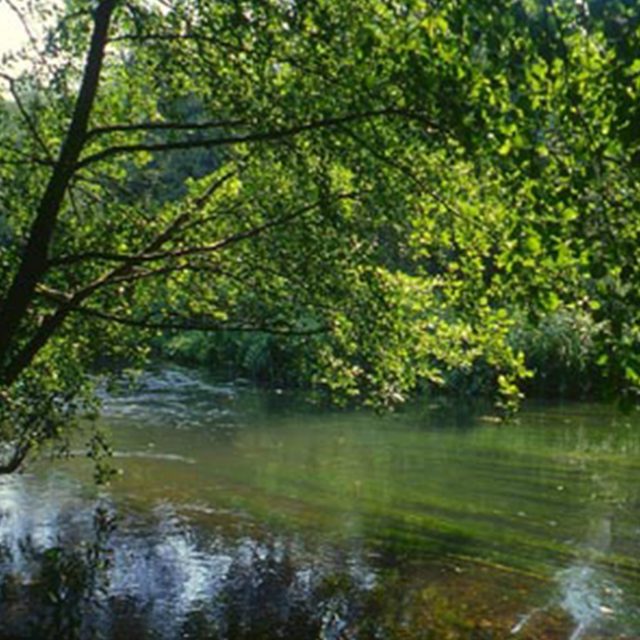 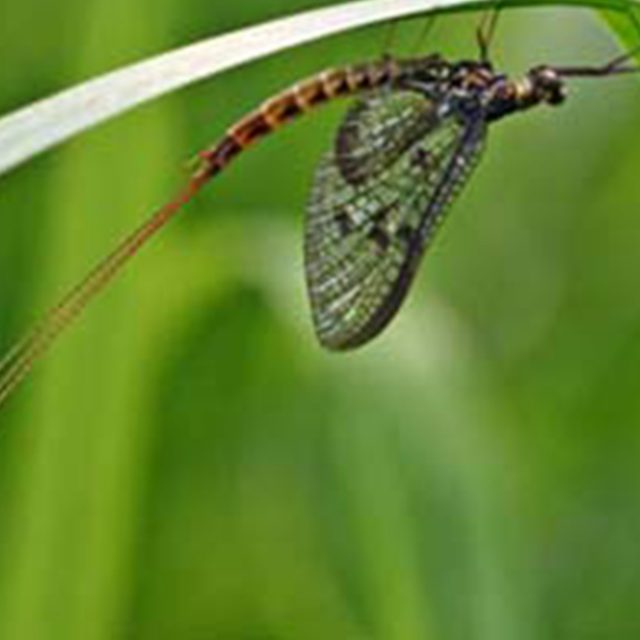