Lowland acid grassland typically occurs on nutrient-poor, generally free-draining soils with pH ranging from 4 to 5.5 overlying acid rocks or superficial deposits such as sands and gravels. Lowland acid grassland includes both enclosed and unenclosed acid grassland throughout the UK lowlands (normally below c. 300m) and covers all acid grassland managed in functional enclosures. This habitat type often occurs as an integral part of lowland heath landscapes, in parklands and locally on coastal cliffs and shingle. It is normally managed as pasture.

Many of the invertebrates that occur in acid grassland are specialist species which do not occur in other types of grassland. The open parched acid grasslands on sandy soils in particular can support a considerable number of ground-dwelling and burrowing invertebrates such as solitary bees and wasps. A number of rare and scarce species such as the Field cricket (Gryllus campestris) are associated with the habitat.

Agricultural intensification
Use of fertilisers, herbicides and other pesticides, liming, re-seeding or ploughing for arable crops.

Afforestation
This is a particular problem with softwoods on light sandy soils.

Development
Activities such as mineral and rock extraction, road building, housing and landfill. 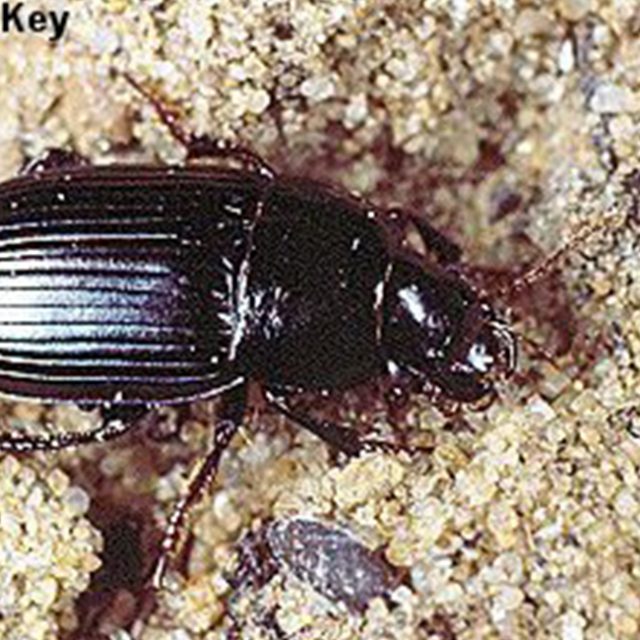 Maintain structural diversity
A range of vegetation types and heights should be maintained including very early successional stages, bare ground and short turf. Banks and slopes, especially those that are south-facing, provide warm conditions for basking and nesting areas for solitary bees and wasps. Many of the rarer ground beetles and rove beetles are found in very dry, sandy grasslands in which early successional conditions prevail and the flightless Field cricket (Gryllus campestris), a BAP Priority species, requires bare ground on which to lay its eggs. However, areas of taller vegetation are also important; flower-rich areas will provide pollen and nectar, while tussocky grasses and sedges support a large number of invertebrates. For example, the RDB fly Tricimba brachyptera lives in the bases of tussocks of Sheep’s fescue (Festuca ovina) and Sand sedge (Carex arenaria) on sandy Breckland grassland. Roadside verges may be an important resource for taller flowering plants and in Breckland provide refuge from heavily grazed areas for the Notable snail-eating ground beetle Licinus depressus.

Diversely-structured scrub should be retained as a minor feature, but excessive scrub invasion can threaten the specialist flora and fauna dependent on open conditions.

The natural drainage of the site must be maintained; very dry sites are a valuable invertebrate habitat. However, any wetter areas or seepages should also be viewed as important and retained.

Maintain light grazing
Light grazing will keep succession to scrub and woodland in check and prevent excessive bracken invasion. A rotational grazing system will promote diversity and ensure that there are areas where plants can flower and set seed. Overgrazing can be a serious problem on acid grassland sites and care should be taken to ensure that important plant communities are not destroyed. The RDB ground beetle Amara fusca feeds only on the seeds of Artemesia campestris and A. vulgaris; mowing or grazing these plants on Breckland sites where the beetle is found is very damaging as it reduces the availability of seeds.

A sizeable dung-associated fauna can be present at grazed sites, but the use of avermectin drugs to treat stock is known to be very damaging to the dung-associated invertebrates such as fly larvae and dung beetles. Alternative treatments should be sought, but if avermectin wormers are used, the animals should be kept off the site for at least 10 days after treatment. Slow-release wormers are not suitable for livestock grazing sites of conservation value.

Cutting
This is very poor grassland so only needs management if and when necessary. Cutting may be appropriate on sites with firm soils, but where there are fragile light sandy soils the cutting machinery is likely to cause damage. A major limitation of mowing is that it does not provide for continuity of dung fauna.

Where grazing is impractical and management is judged necessary, a very effective means of maintaining structural diversity is to mow in weaving or closing fashion so as to leave a small scale mosaic of cut and uncut patches; by adopting a different random pattern the next time then some bits will be cut more often than others. However, mowings must be removed, as leaving them increases nutrient availability and encourages the development of a closed sward.

If flowers that provide nectar sources are localised, or other flora of value to invertebrates are patchy, then separate consideration of management needs may be appropriate. This in particular may apply to shrubs such as broom, sallows, sloe, hawthorn and bramble where they are within a grassland or at its margins.

Disturbance
As many specialist invertebrates of acid grassland on dry sandy soils require open, early successional habitats, some form of disturbance is required to maintain such conditions. In Breckland, where traditional management has included ploughing in the past, rotavation or other forms of mechanical disturbance can be very successful. It is important to emphasise that this is not advocated for grasslands that have no history of such disturbance. Management should take into account the past history of any site before imposing any new or modified regime.