Glasgow is buzzing, it is full of life! Over 6,000 species can be found living within the city, most of which are invertebrates.

Buglife has joined forces with Glasgow City Council to transform mown grassland in parks around Glasgow into colourful and wildlife-rich wildflower meadows. The wildflower meadows created during this project have benefitted a whole range of invertebrates as well as other wildlife.

Creation of wildflower meadows within the parks has involved planting a seed mix with a diverse range of wildflower species including Yarrow, Cuckoo flower, Field scabious and Red clover as well as many others that are of known Scottish origin.  Yellow rattle seed has been sown into the parks to reduce vigorous grass growth and promote wildflower species diversity.

One of the most important issues that has been dealt with within this project has been a change in meadow management so that most of the meadow is cut once in late September and then lifted, leaving an area uncut for hibernating invertebrates and other wildlife.

Cutting the meadow once will help to reduce competition between species by killing weeds and will provide light and space within the meadow. This will ultimately create a healthier meadow and also help in improving wildflower species diversity providing a wide range of food plants for pollinating insects.

Summary of habitat creation and management:

Surveys for pollinating insects using the wildflower meadows occurred during each year of the project and a total of 139 species of invertebrate were recorded.  This includes several species new to Glasgow such as the parasitic solitary bee Sphecodes geofrellus seen foraging on Ragwort at Kelvingrove Park and Alexandra Park and the leaf beetle Galeruca tanaceti observed feeding on Common Knapweed at Linn Park. 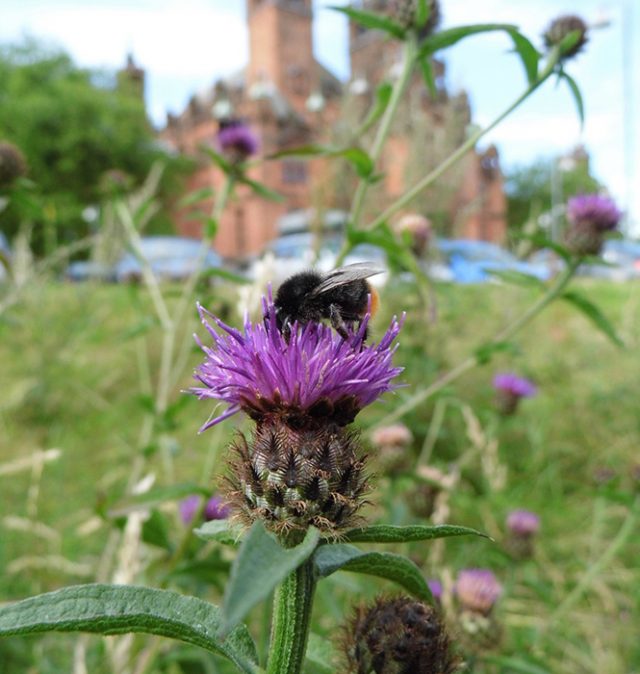