Pot beetles are a fascinating and charismatic group of leaf beetles that are very rare in Scotland! The Spotting Pot Beetles project has been raising awareness of Pot beetles through workshops and surveys.

Pot beetles are amazing insects within the leaf beetle family. These beetles get their common name from the protective shell-like ‘pot’ that the larvae live in, created using their own droppings. The other key feature of these beetles is that the head of the adults is hidden under their bulging pronotum, which is the source of the scientific name for the genus Cryptocephalus meaning ‘hidden head’. 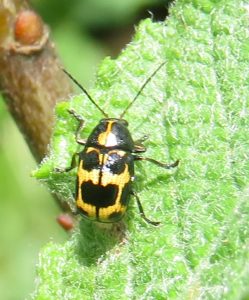 Ten-spotted pot beetle (Cryptocephalus decemmaculatus) is yellow with black spots and is typically found in damp, deciduous woodland and is specifically associated with willow and birch. This species of beetle has an extremely localised distribution in the UK with only a single known site in England. In Scotland, this species has historic records at five sites, although it is has been recorded at only two of these since 1980, and only one of these (at Black Wood of Rannoch in Perthshire) has multiple records with detailed location information.

In July 2017, several adults were recorded at Black Wood at Rannoch with the help of volunteers and during surveys in July 2018, a population was discovered in a new 1km square.

In 2019, surveys found healthy populations at the 1km recorded in 2018, as well as in two new areas of a third 1km square!

Six-spotted pot beetle (Cryptocephalus sexpunctatus) is reddish-yellow with black spots and has been found on a number of plant species including Aspen, Crack willow, Hawthorn and young oak. This species has an extremely localised distribution in the UK with only one known site in Scotland and two sites in England, one of which has had no sightings since 2003.

In June 2017, two adults were recorded from young birch saplings at Kirkconnell Flow, near Dumfries with the help of 12 volunteers.

Surveys at the same location in 2018 found no pot beetles, then in July 2019 two individuals were recorded again from the same area plus fifteen individuals recorded in a new area of the reserve.

This project was funded by Scottish Natural Heritage.