This exciting species focused project is raising awareness of the very rare Bordered brown lacewing (Megalomus hirtus) and its relatives through surveys and workshops.

Previously the Bordered brown lacewing was only known from Holyrood Park in Edinburgh with historic records from Blackford Hill in Edinburgh, St. Cyrus National Nature Reserve near Montrose and near the village Muchalls in Aberdeenshire. This species is associated with aphids on Wood sage and has only ever been recorded at a handful of sites in Scotland. As a result of its rarity, the lacewing is classified as a UK Biodiversity Action Plan (UKBAP) priority species and in Scotland is on the Scottish Biodiversity List.

Before this project, the Bordered brown lacewing was last recorded at Holyrood Park in 1982. Through an internship project with Buglife, supported by the People’s Trust for Endangered Species, Mike Smith surveyed Holyrood Park in the summer of 2015 to identify if the lacewing was still present. Although only one specimen of the lacewing was collected during Mike’s survey, in June and from its host plant Wood sage, the survey proved that the Bordered brown lacewing is still extant in the UK and paved the way for future surveys at the site.

Through this current project, surveys have been run with volunteers in the summer of 2018 and 2019 at Holyrood Park, Blackford Hill, St Cyrus NNR, at Doonie Point at Bridge of Muchalls and at Skatie Shore and Perthumie Bay by Stonehaven. The lacewing was recorded at Doonie Point at Bridge of Muchalls by Dr Nick Littlewood in July 2018; this is the first record from Aberdeenshire since 1916!

Recent surveys have discovered the Bordered brown lacewing at four areas within Holyrood Park and at several new sites along a 13km stretch of coast from Stonehaven to Portlethen Village in Aberdeenshire. During the most recent surveys in 2019, volunteers successfully recorded 22 adults of the lacewing!

This project has also run workshops to raise awareness of this rare species, other lacewings and their allies (scorpionflies, snake flies and alderflies). 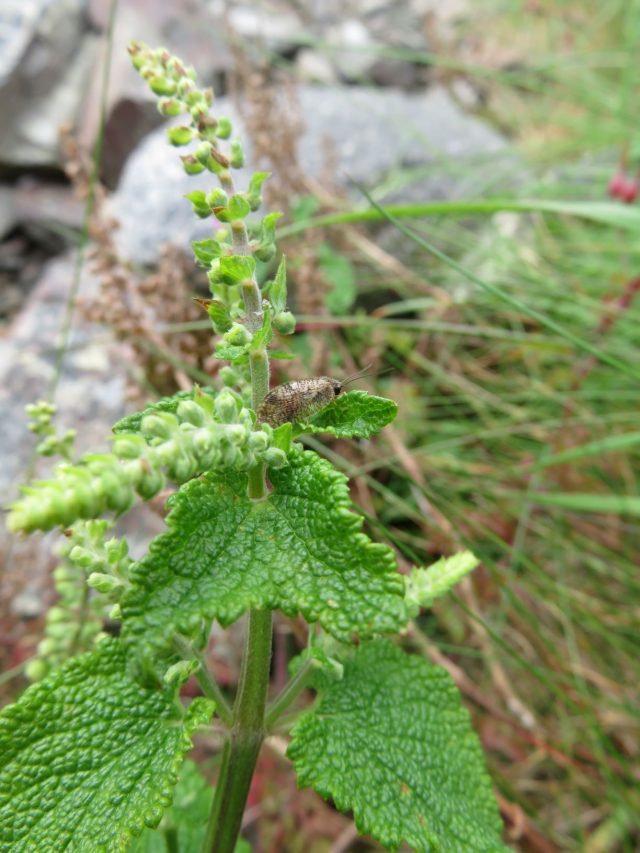