Insect populations are in crisis

Recent studies paint a grim picture of the decline of insects across the planet. A well-publicised review recently concluded that current rates of decline could lead to the extinction of 41% of the world’s insect species over the next few decades. Butterflies, moths, bees, wasps, and dung beetles are amongst the most at risk, along with freshwater insects such as stoneflies, caddisflies and mayflies. A small number of unfussy, very mobile and pollutant-tolerant species are able to cope with the damage that humans are doing to our planet. These generalist species are replacing the rich diversity of species that make up the fabric of life on Earth.

It is becoming increasingly clear that our planet’s ecological balance is breaking and there is an urgent need for an intense and global effort to halt and reverse these dreadful trends. Allowing the insect eradication crisis to become a catastrophe is not a rational option for anyone.

Insects make up over half the species on Earth, our planet’s health depends on them, so their enduring disappearance is intensely concerning. The rate of loss of insect life is much faster than that of higher profile wildlife like birds and mammals – the local extinction rate for insects is eight times higher! There are many causes, and they all need to be addressed, but the evidence is clear, we will not halt the crisis without urgently reversing habitat loss and degradation, preventing and mitigating climate change, cleaning-up polluted waters, and replacing pesticide dependency with sustainable farming methods.

We believe that there should be sustainable populations of all insects. ‘No Insectinction’ is Buglife’s response to the current crisis – a prescription for healing our planet, by restoring our depleted and devastated insect populations (and indeed all other invertebrates such as earthworms, spiders and snails).

We must achieve three things:

3) Friendlier relationship with insects – We need to act now to stop insectinction. However, the scale and quality of that action is still limited by our lack of understanding and awareness.

‘No Insectinction’ is a call for action, a coming together of people and organisations with a shared endeavour to heal our planet’s life support system.

Leading by example in the UK and EU, we call upon governments and decision makers around the world to take decisive action to tackle this ecological crisis. 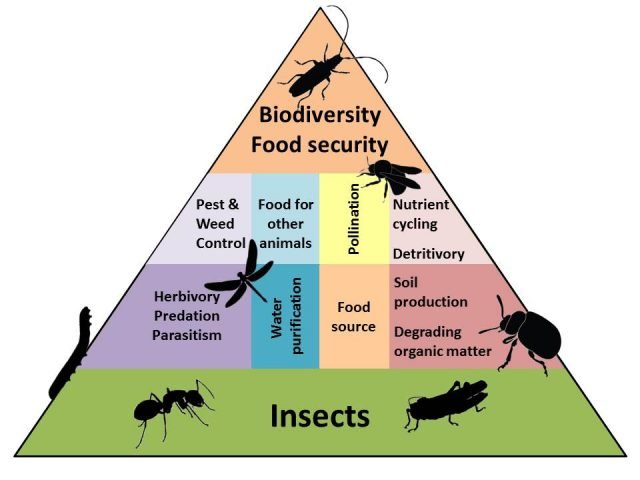 Maintaining insect populations is essential for all these important roles they play. Adapted from the UN report ‘We are losing the Little things that run the world’