This little beetle is one of the UK’s rarest and most beautiful insects. The Scarlet malachite beetle (Malachius aeneus) is a beautiful red and green insect, found on just eight sites in the UK.

The Scarlet malachite beetle (Malachius aeneus) is a beautiful red and green insect, found on a very small number of sites in the UK.

This small but handsome beetle is not only incredibly rare, it is rather mysterious. The adult beetles appear at the beginning of end of April/May, feeding on grasses and flowers in meadows, often in the vicinity of thatched or timbered cottages during the summer months.

The beetle is found mainly in Essex, Cambridgeshire and Hampshire, although it was once found in counties across the south and east of England. The reason for its decline is not known, but is thought to be caused by general habitat loss and intensive farming practices.

Research by Buglife has suggested that the beetle lays its eggs in thatch and timber. If you have a thatched roof or timbers in your home, and live in one of the areas where the beetle lives, please have a good look for these beetles, using our survey information and contact us if you think you have found any Scarlet malachite beetles.

From 2012 to 2016 Buglife has been working in collaboration with Ian Hughes at Lifeforms together with Natural England, Essex Wildlife Trust, Furzey Gardens and local landowners, to continue surveys of key sites, captive breeding of the beetle as well as monitoring their behaviour in the field. Lifeforms has been working closely with landowners to ensure their sites are well-managed for the beetle and creating artificial nesting sites ‘beetle cottages’. For more information on management for the beetle see the Scarlet malachite beetle management sheet.

Where can I find the beetle?

The most important counties for this beetle are Essex, Hertfordshire and Hampshire, but in the last 3 decades it has also been found in Bedfordshire, Dorset, North Somerset, West Kent and Surrey.

If you live in one of the important counties or one where it has been previously found please look out for the beetle, join our Scarlet malachite beetle survey, and get in touch if you find one. 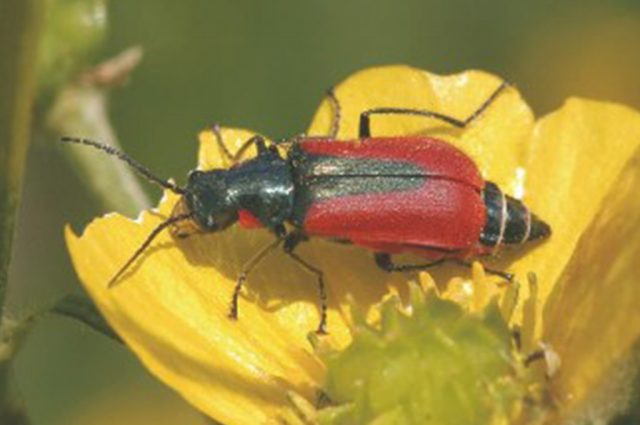