Oil beetles are incredible insects, but they are also under threat. Three of UK’s native oil beetles are now extinct, and the remaining five species have suffered drastic declines in their distributions due to changes in the way our countryside is managed.

The Short-necked oil beetle was thought extinct until it was recently rediscovered at a site in South Devon, and on the Isle of Coll in Scotland.

The Mediterranean oil beetle was also thought extinct until rediscovered in 2012 through the oil beetle species recovery programme.

Oil beetles have been identified as priorities for conservation action through the UK Biodiversity Action Plan (UKBAP) – meaning work needs to be done to conserve them and their habitats. To help landowners and managers our oil beetle management sheet is now available.

Oil beetles are reliant on solitary bees to compete their life-cycles. The health of oil beetle populations is therefore dependent on the health and diversity of wild bees. The ideal habitat for oil beetles species is wildflower-rich grassland – a habitat that has declined in quantity and quality due to intensive management of the countryside. Oil beetles are sensitive to changes in land management and are a good indicator of the health of our countryside.

Oil beetles have some of the most extraordinary life cycles of any British insects.

They rely on solitary mining bees to complete their life cycles. Adult oil beetles feed on the leaves and petals of flowering plants and grasses.

The eggs hatch into leggy, louse-like larvae known as triungulins. These larvae are very active, and for good reason – in order to survive and reach maturity they must immediately find a bee and hitch a ride on its back.

To have the best chance of meeting a bee, the larvae climb up flower stems and lay in wait within a flower. A solitary bee collecting nectar and pollen for its own nest may unwittingly become covered in the oil beetle larvae, secured by their specially-adapted hooked feet.

Once inside the bee’s nest, the triungulin disembarks and begins to feed on the bee’s eggs and the store of pollen and nectar. The larva develops in the bee burrow until it emerges as an adult oil beetle ready to mate and start the whole cycle again.

Adult Black, Violet and Short-necked oil beetles are active in the spring, whilst adult Rugged and Mediterranean oil beetles can be found in the autumn, winter and early spring. 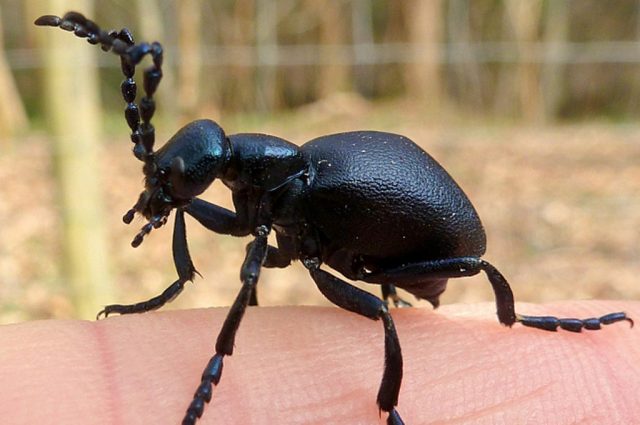