The White-clawed crayfish (Austropotamobius pallipes) is one of the UK’s largest freshwater invertebrates and is our only native crayfish.

The White-clawed crayfish was once a widespread and common species in English and Welsh rivers, but has suffered a decline of 50 – 80% across its European range in the last ten years and is classified as ‘endangered’ on the IUCN red list of threatened species and is at risk of global extinction.

Many populations of White-clawed crayfish have already been lost and most of those remaining in streams and rivers are at risk of extinction in the future. The decline has been caused by invasive, non-native crayfish species such as the American Signal crayfish (Pacifastacus leniusculus), which spread of a disease known as crayfish plague, habitat degradation and pollution.

Invasive crayfish are a particular problem for White-clawed crayfish and for the health and ecology of the UK’s river habitats.

The spread of invasive species and their disease put native crayfish and our rivers at risk but you can help Stop the Spread by following the Check, Clean Dry code and cleaning all your freshwater clothing and equipment thoroughly.

Explore more about the White-clawed crayfish, its biology and life-cycle

Got a question about crayfish in the UK? Then see Crayfish FAQ’s, which provides a summary of subjects that often get asked. 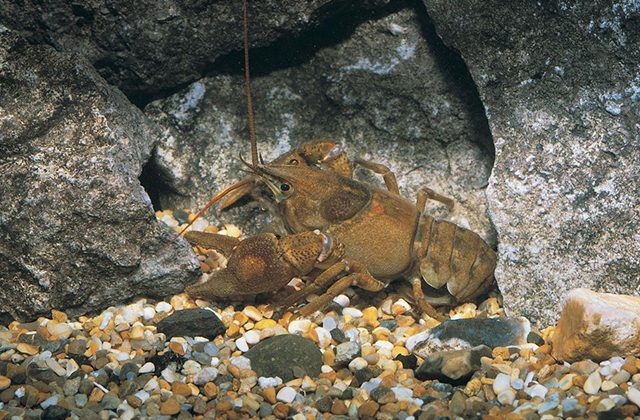