The Teesside Stepping Stones project has enhanced 4 brownfield sites in the region, creating a variety of habitat features for its associated rare and declining invertebrate populations.

Teesside has a diverse industrial history which began with the construction of a major iron works in the 1800s, followed by heavy engineering, shipbuilding and chemical industries.

Large areas of the Tees Estuary were reclaimed using blast furnace slag, much of which has remained undeveloped and has weathered over the years creating low-nutrient, high pH (alkaline) habitat.

In partnership with INCA, we created 3 ‘experimental’ substrate plots using Pulverised Fly Ash (PFA), Blast furnace slag (BFS) and sand. The sandy area has returned to rank grassland however the PFA and BFS areas have colonised at a much slower rate.

The slag area in particular, where we also created 2 bee banks now supports a variety of wildflowers and patches of bare ground. In a near-by area of site we created 1 ha of wildflower rich slag grassland with areas of varied topography (mounded piles of brick and rubble). A variety of species including Kidney vetch, Common toadflax, Black knapweed and Wild carrot were seeded and plug planted with the help of Lucite International staff to provide a rich nectar source for pollinators.

We teamed up again with INCA, to enhance 4ha of non-operational land at BP CATS with the help of the BP Green Team.

A digger was used to create 3 bare ground scrapes which has successfully encouraged the development of a species rich open grassland. The material generated from the scrapes was used on site to create a number of bee banks.

A digger was also used to re-face part of an existing bank to provide fresh vertical cliffs. Monitoring surveys showed an increase in the number of species of solitary bees and wasps using this newly created habitat feature to create burrows.

TVWT and volunteers have enhanced the floral diversity of the site by removing selected areas of scrub and cutting the grassland on an annual basis.

The open grassland supports species such as Field scabious, Bird’s-foot trefoil, Common spotted orchid, Black knapweed and Bladder campion important to a range of pollinators such as bees, butterflies, moths and hoverflies.

Buglife and TVWT volunteers have transformed an area of rank grassland into an area rich in wildflowers. BFS was used to create perfect conditions for wildflowers to establish and the grassland is now buzzing with invertebrates. TVWT volunteers continue to manage this area by removing species such as Creeping thistle. Paving slabs were also added to create basking areas for warmth loving invertebrates such as butterflies.

A combination of grassland management (cutting and scrub clearance) and in some areas sowing Yellow rattle has been used to increase the habitat suitability for Dingy skipper and Grayling. This management will also improve connectivity with an adjacent site that supports good populations of these species. 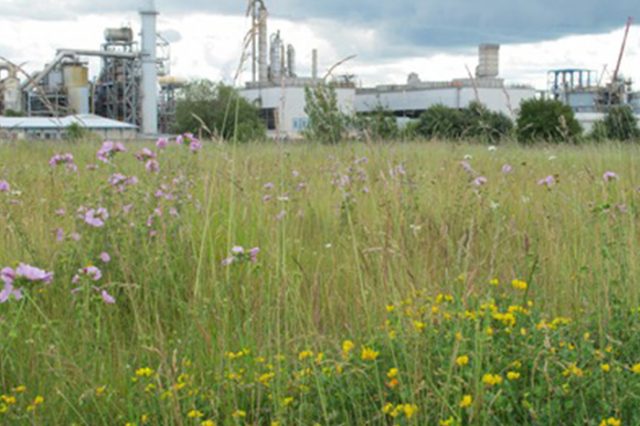 Buglife worked in partnership with INCA (Industry Nature Conservation Association) and the Tees Valley Wildlife Trust to deliver this three year project; which is funded by The SITA Trust Enriching Nature Programme.