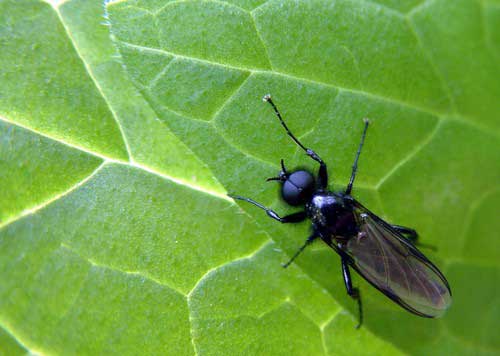 “Yuk! What are all of these horrible black flies?  They’re all horrible and hairy and have horrible dangly legs!”  My daughter is clearly not feeling the love for the ‘love bug’.

‘Love bug’ is a colloquial name for the St Mark’s fly (Bibio marci) – so called because they emerge around St Mark’s Day on 25th April every year and can be seen in flight through May.  This regular appearance means that, in my opinion, along with bluebells and returning swallows, St Mark’s flies are a true herald of Spring.

They are found around woodland edges, along hedges, and damp grasslands, and can be seen throughout Cornwall.  Male St. Mark’s flies are around 12mm in length with clear wings, large eyes and long dangly legs.  Females are bigger than their male counterparts at 14mm in length with smoky brown wings and much smaller eyes and legs.

Interestingly, each of the male’s eyes are divided by a horizontal groove and have separate connections to the brain.  This allows the males to use the upper eye part to look out for females and the lower part to monitor their position in relation to the ground, allowing them to hover in the same position.  The black male flies are very conspicuous, with long dangling hind legs.  You can often see them when they congregate in big swarms flying slowly, up and down, at around head height – trying to attract females.

By midday the successful males will be coupled up with females in mid-air copulation – and it is perhaps this amorous activity that gave the flies their name of ‘love bugs’.

The St. Mark’s fly doesn’t  spend a lot of time in its adult form – approximately only one week.  The majority of their time is spent as larva in the soil.  During autumn and winter, larvae feed on rotting vegetation which they chew with their strong mouthparts.  In springtime the males emerge first and the females a few days later.  After mating, females lay their eggs in the soil and die soon afterwards.

Swarms of St. Mark’s flies may be annoying as you walk along country lanes in the spring sunshine, but they are very useful creatures,  – they visit flowers to feed on nectar, making them important pollinators of fruit trees and other early-flowering crops.  They are also a source of food for fish, being gobbled up in huge numbers by trout.  In fact there is a fly-fishing fly known as a Bibio which mimics the St Mark’s fly.

If you are out and about this week keep an eye out for the St Mark’s fly – a gangly-legged herald of spring!