Where in the UK: Nationally Scarce but locally common in many coastal and inland localities in southern England. Apparently exclusively coastal in Wales, north-west England, south-west Scotland and Ireland.

The Gold-fringed Mason Bee (Osmia aurulenta) is a native, medium-sized, solitary bee that can be found predominantly in coastal localities; it can also be found inland – generally on calcareous soils (ie. grasslands, quarries, chalk woodlands).

Females are medium-sized with a bulbous head, brick-red hairs on their thorax and a brown abdomen fringed with orange-golden hairs (from which it gets its name).  Males are slightly smaller and duller in colour.

As with many solitary bees the Gold-fringed Mason Bee takes one whole year to pass through a complete life cycle and may only survive as adults for a few months. This isn’t long enough for them to raise their oﬀspring to adulthood, so the young bees have to fend for themselves, hence the term ‘solitary bee’.

Following mating, females construct a nest containing a small number of cells in which she’ll lay an egg and leave a ball of food; made by mixing pollen and nectar. Once complete, she’ll then close the entire nest.  Adult bees will then die as they have completed their job. The larvae survive the winter, eating the food supply that’s been left for them in their own chamber. Emerging the following spring as adults when the cycle begins again.

Buglife is working to increase awareness of invertebrates and the Gold-fringed Mason Bee through specific projects, including Natur Am Byth and B-Lines, but we need your help!

Join a recording scheme and log your finds – send any records/sightings to BWARS or download the iRecord app and get recording! 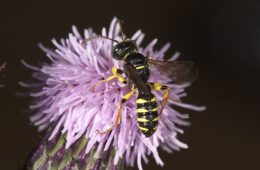 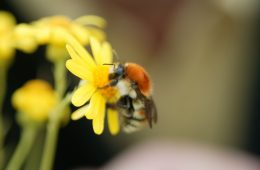