Home > Blog > Why we need to talk about automobile recycling 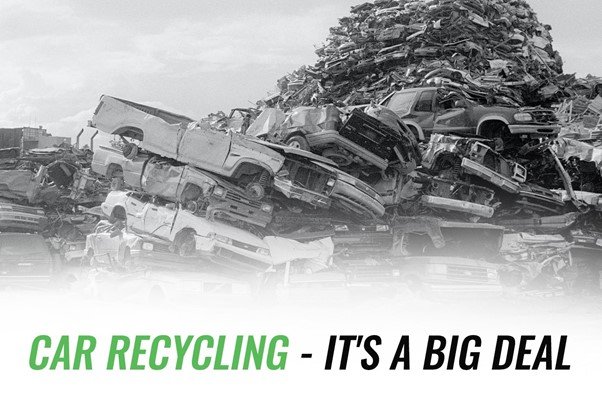 Carmen Adams is a master’s student at San Diego State University. She loves the outdoors and as a result she wants to keep it beautiful. Since a young age she’s been on a mission to improve the environment.

The notion of recycling is a rather familiar topic throughout the world. However, when individuals consider recycling, they often think in regard to cups, plates, containers, and packaging. Though this is an admirable place to start, we as humans need to start elevating our environmental practices in order to further mitigate the negative effects that have begun to emerge on earth. Cars, for example, is a grey area often overlooked when the topic of recycling comes up. Since vehicles are a necessity in many areas throughout the world, they should have proper waste management procedures implemented so that their parts are properly recycled and reused for the future.

A study published by the National Center for Biotechnology Information found that the average lifespan of a car is anywhere from 9-23 years. These results differed based on the varying socioeconomics of each of the 20 countries that the study was conducted in. Though 9-23 years is a rather large gap in time, it is small enough to gain an accurate representation as to the turnover rate that individuals have when it comes to purchasing cars. These numbers indicate that, throughout these 20 countries, the average individual will have roughly 3-7 cars throughout their lifetime. That being said, in larger and higher socio-economic countries such as the USA, individuals will own as many as 12 cars throughout their lifetime.

Unfortunately, there are many obstacles in the way of successfully recycling all of the parts used to manufacture vehicles. One study showed that there tends to be a rather large knowledge and communication gap when it comes to the manufacturer, consumer, and the end of life facilitators. This has resulted in that majority of vehicle parts being downcycled and ending up in landfills; even though they have the potential to be recycled. Another challenge in the way of properly recycling vehicles is the lack of adequate material separation. For example, foam is used quite often in the production of cars, however it would need to be physically separated from the plastic in order for the plastic to be recycled. Due to the mechanical ingenuity that goes into car manufacturing, this separation is complex and often unattainable; this means that roughly 20% of every car is unable to be recycled. That being said, there is still roughly 80% of a car that can be recycled. The leftover recyclable parts include:  glass, air bags, batteries, bumpers, mats, rubber, rims, wheels, oil, doors, fenders, tailgates, etc.. These recyclable items can even be upcycled into usable everyday items such as: bikes, art, home fixtures, new cars, metal roofing, etc..

Recycling vehicles can have many benefits, including aiding in wildlife protection. For example, if the steel from current cars are being recycled, there will be a decreasing need for steel mining; which is incredibly detrimental to local ecological systems. Additionally, non-recycled car fluids can contaminate rivers, lakes, and soil, and pose a health risk to animal life and human life via bioaccumulation.

I reached out to the SellMax in Phoenix who provided me with some of the many benefits surrounding recycling vehicles:

●     If the entire automotive industry in the USA and Canada were to recycle their vehicles, this would provide enough steel for the equivalent of 13 million new cars

How can we as a society work to adequately overcome the vehicle recycling problem? The first and most effective answer to this question is to work on waste prevention. If car manufacturers were to manufacture vehicles with biodegradable materials and easier-to-retrieve set ups, this would prevent car waste from ending up in landfills. That being said, until scientists come up with a material to suit these needs, car recycling is the best option.

What can you do? Simple! Make sure when you are finished with your car that you sell or donate it to an end of life facility in your area.

In Conclusion, car recycling is a sector that has really gained traction within the past decade. Though it is beneficial that the proper steps are being taken, they need to be pursued even further and accurately in order to successfully mitigate car waste.

It is the responsibility of the car manufacturer to assure the products they use are recyclable, the consumer to assure when they are done with their vehicle, they dispose of it properly, and the recycling facility to assure that they are accurately recycling all possible materials.

There are many economic and environmental benefits to recycling cats. If all three of the aforementioned areas are to properly maintain their responsibilities, then the benefits can be reaped and therefore result in a future with less vehicle waste, less carbon dioxide emissions, and less fluids leaking into lakes, rivers, and storm drains.