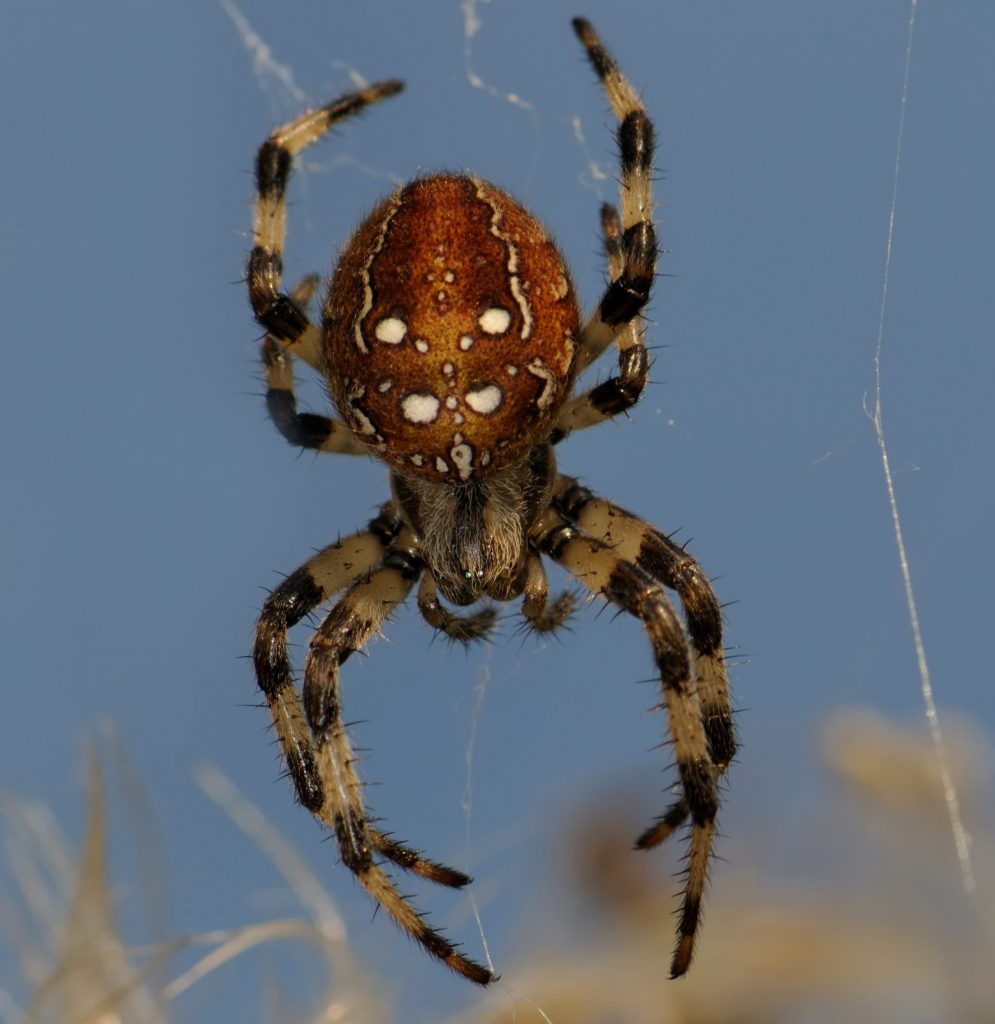 …Guest Blog from Dee Lawlor.  Dee Lawlor is a STEM Communicator and bat rehabilitator based in Scotland.

I’m sitting at my computer in my home office. From where I sit, I can see our fully stocked bird feeder is busy with blue tits, great tits, coal tits, green finches, robins, sparrows, black birds, starlings and (when we are particularly lucky) our resident great spotted woodpecker, Jeremy. All of these bird species have something in common: they are insectivores – insect eaters.

Insects, to me, mean health. A healthy habitat is full of insects – they should be everywhere! In the soil, in the water, crawling over rocks and creeping through leaves; flying through the air and building webs – as the plump Orb-web spider I have just noticed outside my window is doing.

In my happy little plot of Scotland, we are working on rewilding what were previously monocultured fields. One of the first projects we tackled, was to excavate an overgrown garden pond. A pond is one of the best ways to encourage wildlife into your garden after all. As we dug out the years of leaf litter, the thing that stood out the most (other than the smell) was that there was no insect life in or around the pond. Not a single thing.

The water in the pond had been stagnant for years, and nothing was able to live in the foul-smelling soak. After we had cleaned it out and filled it with fresh, clean water, within days we were rewarded with a single water boatman. Within a few short weeks, the water was alive with aquatic insect larvae. This then attracted palmate newts – eaters of aquatic and terrestrial insects. Which then attracted a curious heron, who gets shooed away (we love our newts). Where there are insects, there is life!

As many of you know, the world is going through a time of great challenge and change. One of which is the insect apocalypse. We are losing insect species at an astonishing rate through global warming, droughts, deforestation, and the over-use of pesticides. This is one of the reasons I have put the bird feeder in our garden. Although we are surrounded by fields, most of them are agricultural, meaning they have been sprayed generously with pesticides.  Out in the countryside, there should be no need to supplement the wildlife, but there is. A great need.

I volunteer as a bat rescuer and rehabilitator. There are 18 species of bat found in Britain and all of them are obligate insectivores. This means that they only eat insects. More and more, people are bringing me bats that are underweight, sometimes to the point of starvation. This is especially sad in autumn, when bats should be at their heaviest for hibernation.  In autumn, there should be no such thing as a skinny bat. They should all look like little kiwi fruits – fuzzy and round. An underweight bat looks rather flat. And because of the loss of flying insects, there are far too many ‘flat bats’ being found. The same goes for most of our native species who rely on insects. Hedgehogs, for example, are plummeting in number. These icons of British wildlife require a diet of beetles, earthworms, caterpillars, slugs, earwigs and millipedes. However, due to increasing use of pesticides and the trend for minimalist, ‘clean’ gardens, these insects are all on the decline. Every wildlife rescue centre I know has been inundated with starving hedgehogs over the last few years.

In mythology, the world is carried on the back of the Cosmic Turtle. In reality, the natural world is perched on the chitinous shoulders of the insects. Without insects, we would not have the vast majority of fruiting or flowering plants. We would not have the soil. We wouldn’t have luxury products such as honey and silk. We would not have the thousands upon thousands of mammal, bird, fish and reptile species that are classified as insectivores. There are also many human cultures that eat insects! They are, after all, a rich source of protein, vitamins and minerals. Insects are vitally important, and we simply cannot have a healthy world without them.

If Dee has inspired you and you want to ensure insects and pollinators have space to thrive take a look at our videos below to find out about “B-Lines” and “Five Things To Do To Reverse Insect Decline”: