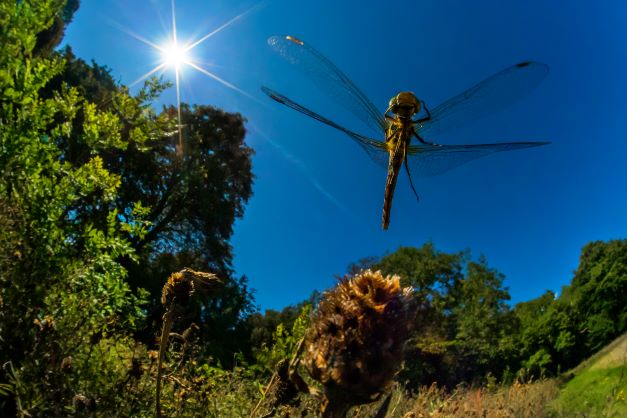 Join us in our latest blog from author John Brackenbury, as he shares his passion.  Through the use of novel photographic techniques, John gives us an ‘insect-eye view’ of the world of flying insects with some stunning results.

For me, the most fascinating thing about insects is that they fly. And although butterflies for example are prized for the form and ornamentation of their wings, we need to remind ourselves that wings are there to do things. Many years ago, I conceived of a new kind of close-up image which would replicate the world of a flying insect, as it might be experienced by another insect sitting or flying alongside.  This second insect would in fact be a proxy for a human being, magically reduced in size to an inch-high Tom Thumb.  Tom Thumb would see the insects, not only in extreme close-up, but also at the same time as occupants of a landscape: the same landscape that we ourselves see with its rich tapestry of fields, hills, rivers and sky. This would be a radical departure from the conventional depiction of insects as isolated objects at the end of a macro-lens.

In order to achieve this alternative view of nature at the close-up level, I needed to develop hardware based on a wide-angle lens, rather than a conventional macro-lens.  Having developed the hardware, I then needed to school myself in new kinds of field-craft. This involved getting within a few centimetres of the flying insect, using a hand-held camera and shooting ’blind’ because there is no time to compose the picture. To stand a reasonable chance of securing a picture in these conditions meant shooting a high-speed burst of images rather than a single shot and hoping for the best!

The most important lesson I learnt from my experience is the need to understand the behaviour of the insect. That intimate knowledge enables you deal with the unpredictable. For example, if I wanted to photograph an insect taking off from a flower – and in practice this is the easiest way of doing things – I would need to take into account which way it is facing relative to the sun, whether it is clinging to the top or the side of the plant, where is the position of my own shadow as I approach the insect, should I approach from below (almost always the case), from above or from the side. And crucially, what is the background scene, the surrounding landscape. And finally, in this mini battle of wills between me and the insect, when is the precise moment to press the shutter button and release the high-speed burst?

One of the benefits of this wider view of the insect world is that it allows you to see the play of light on the wings and I have been surprised at how translucent the wings of a butterfly actually are. Freezing the wings in flight also reveals the extent of the distortion that they undergo from moment to moment during the stroke. Far from being accidental, this is a necessary feature of the way insects create aerodynamic force: in fact, I often refer to the butterfly wings as ‘moving curtains.’ I also understand much better the differences between the flow of time in a small animal as compared with ourselves. As the great physicist Carl Sagan once remarked “…a butterfly flutters for a day and thinks it’s forever.”

If you are sufficiently intrigued by nature, one thing will always lead to another. The insights I have gained into the behaviour of flying insects, have spawned further questions which I am now beginning to explore by extending my techniques to high-speed video. 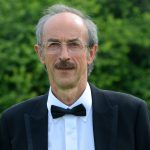 John Brackenbury is a retired university teacher who lives in Cambridge. He spent more than 40 years teaching and doing research, primarily in the University of Cambridge after obtaining his doctorate there in 1974. His subject was pre-clinical Veterinary Science and was originally educated as a zoologist. Over the last 35 or so years John also acquired professional qualifications in photography. Photography became an important tool in his research and eventually took on a life of its own, especially after he had retired from university life. 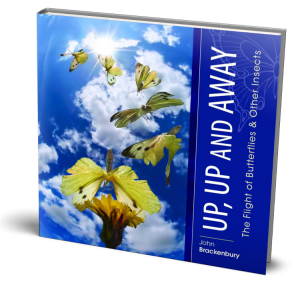 Through the use of novel photographic techniques, John Brackenbury gives us an ‘insect-eye view’ of the world of flying insects. By presenting them in the wider landscape they inhabit, rather than at the end of a close-up lens, the author reinforces the view that even relatively ‘simple’ animals like insects share the same world as human beings. This theme chimes with current thinking about conservation and the importance of diversity in the natural environment.

Mastery of the air is the supreme achievement of the evolution of insects and the images bring the viewer closer than ever to an experience of the ‘action’. The visual framework forms a convenient basis for discussing some of the ecological, behavioural and physiological aspects of flight in accessible non-technical language.