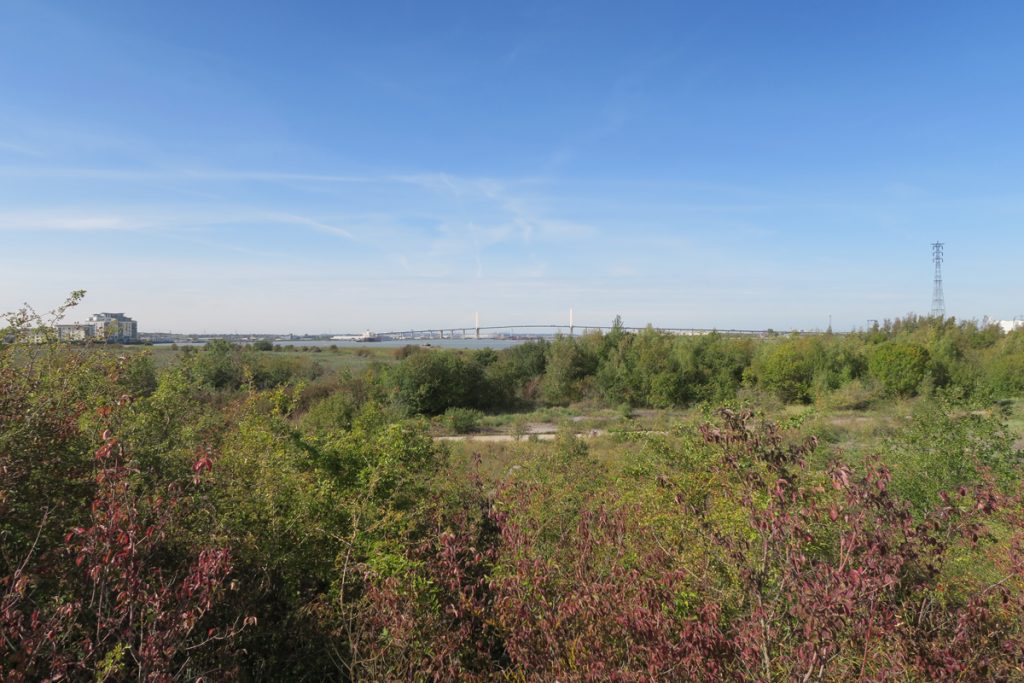 The Swanscombe Peninsula juts sharply into the River Thames from the Kent shoreline, just a few kilometres downriver from the QEII Bridge. On a map it seems almost empty, but if you look closer, this is a vibrant, post-industrial landscape. All across the low-lying peninsula, wildlife thrives.

Much of the peninsula was once saltmarsh and wet grazing pasture, home to a remote farm and a few sheepfolds. Swanscombe Marshes dominated the landscape, bordered by Botany and Northfleet Marshes to the east and Broadness Salt Marsh to the north.

To the south, chalk hills rose to the small town of Swanscombe, where in 1825 the first ‘British Cement’ works began production. Quarrying has since gnawed away at the hillside, leaving a sheer drop from the town to the quarry pits below. A public footpath traces a narrow chalk spine down to the peninsula, before branching into Swanscombe Marshes.

The tip of the peninsula is marked with a sky-piercing National Grid transmission tower, one of a pair carrying power lines across the Thames. Nearby, a tidal creek is home to an off-grid community of boats and stilted shacks. All routes into this area are marked with ‘keep out’ signs.

Under the shadow of the transmission tower, a disused concrete jetty and wharf bear witness to the Swanscombe cement works. Trams once shuttled between the two, the broken tracks still visible in places. An aerial tramway also carried chalk and clay inland, scooped from Thames barges. Two pylons still rise amid the reedbeds, rusting ghosts of this once busy landscape.

Waste from the cement works was dumped across the marshes, followed by landfill in the 1970s. The rubble and rubbish rose in low hills, burying the eastern half of Swanscombe Marshes and most of Broadness Salt Marsh.

The cement works closed in 1990 and the peninsula was soon reclaimed by nature. The hills of landfill now support woodland and scrub. Water is all around, but not always seen. Waterfowl stir and splash, hidden within the reeds. Dragonflies and damselflies dart through the air, their dazzling colours contrasting with the golden hues of late summer.

‘Pre-used’ sites like Swanscombe Marshes are known as brownfield, and while often dismissed as valueless, they can be home to some of our most endangered wildlife. The landscape’s mixed up history provides a wide range of habitats, allowing nature to flourish. The peninsula is also popular with locals, who enjoy walking and cycling here, away from busy streets.

The Swanscombe Marshes are worthy of the greatest protection. They provide a vital breathing space for people and beleaguered wildlife, a free recreational space where all can flourish.